On the 12th of May 2019, I ran the Diacore Half Marathon, my fourth and FASTEST. Nine weeks prior, I had run the Gabs Half Marathon and I was disappointed with my performance. I was so convinced that I would achieve the 2:35 time I had set for myself but when I started struggling around 15/16km I never found the energy or mindset to lift me and it was a bitter battle to the end. On the one hand, I was proud of myself for earning my 3rd Half medal but I was also confused. How could I have trained so hard and not improved much. I remember writing on the blog, “Friends, there is a lot more work to do.” In the days that followed, I spoke to my friend Johannes who emphasised the importance of speedwork and said he had an 8-week training plan that I should try out. After moping for a few more days, I started training for Diacore. 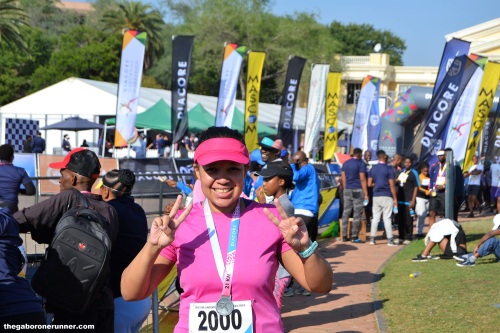 These are Some of My Highlights

The City is Alive: In the early hours of the morning, Gaborone was abuzz with excitement. My cousin Ndiye had travelled from out of town for the race and was staying with us. We all got up early, picked up my dad who was doing the 10km race, and got to the parking lot in Molapo Crossing around 05h40. As usual, there were so many cars and people milling about. No where near the numbers you find at Soweto, but definitely a huge crowd by our standards. So many people we knew were running and on the way from the parking lot we met our friends Malcolm and Tshepi and then found Zurika, Johannes, Eunice, Oarabile, Polelo and Fuzzy closer to the start line. At my last Diacore (which was my first Half), I remember feeling relieved that the day had finally arrived. This time I felt a lot more excitement and confidence. When I saw Johannes, I told him I would be very surprised if I didn’t PB and even promised him a couple of beers if I did!

A Comfortable First Half: When the gun sounded, it was a slow jog out of the hotel grounds. With Tapiwa not there, I had planned to run solo but within the first km or so I realised that Fuzzy was next to me. She was doing her first Half and I had no clue what her pace was but after 3km we were still together. Although we didn’t chat much, it was comforting to have someone beside me who had a similar pace. My splits (min/km) for the first 5km were 07:10/ 07:10/ 07:13/ 06:56/ 06:43, much faster than last year’s Diacore. I was very comfortable and felt in control of my race. Around 4km, Fuzzy asked about the route and I told her I would just give her step by step instructions as giving the whole route would sound overwhelming! So as we turned off the Old Lobatse Road I said, “Next stop, UB Circle”. She laughed and said, “You say that like it’s just down the road!” On this stretch we found ourselves with the 2:15 Striders Bus. I knew there was no way I would keep up, but it was good to have them in my sight. One guy tried to get us to hop on the bus, and I told him “Go ahead. I’ll keep an eye on you!” My splits for the next 5 km were 06:46/ 06:51/ 07:05/ 07:00/ 07:08. At 10km, I took my first gel. As we approached the UB Circle, I told Fuzzy “See! We are here! Next stop Main Mall!” and then we parted ways. 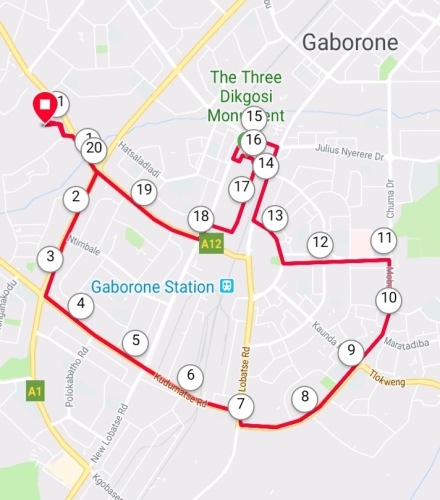 Pushing Hard in the Second Half: There was a bigger distance between me and the Striders Bus at this point but I wasn’t perturbed and continued to focus on running my race. And so far my race felt really good. I passed the Civic Centre and then the President’s Hotel and when I turned right at the top of the Main Mall, I knew I would soon face my biggest test – my 15/16 km enemy in the CBD. I powered my way up the Bull and Bush incline and my splits for 11 – 15 km were solid: 07:15/ 07:10/ 07:08/ 06:58/ 06:56. As I entered the CBD, I channeled more positive energy by reminding myself how strong I was feeling and I thought back to how great my last training run had been in the CBD. I kept pace with someone wearing a t-shirt that read “German Tank” for a while and at the 17km point I took my second and final gel and overtook the tank. As I made my way out of the CBD and onto the main road, I knew a 2:35 time was in hand so long as I maintained my pace and spirit. Another km down the line, I realised that maybe it was time to think of a 2:30 time. My splits for 16 – 19 km were: 07:08/ 07:16/ 07:17/ 07:12. I couldn’t do the maths, but I knew this was going to be a huge PB. I just needed to step it up even more.

The Final Push: And step it up, I did! I powered home in 06:42/ 06:39. As I made my way through the Hotel Gate and towards the gantry, I was forced to duck around the 10km runners. I approached the Finish Line and saw my dad and cousin on the sidelines who had both done the 10km race, and I just kept pushing! I then saw Ditiro, Zurika and Elisa. 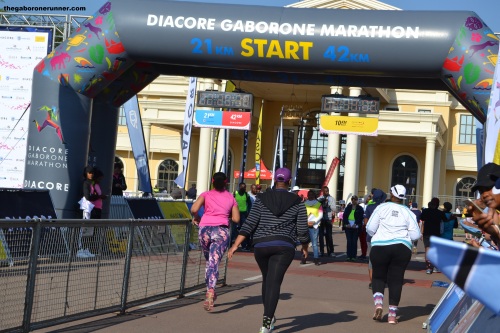 Emerging Victorious: What an incredible day for all of us. Zurika and Elisa ran a brilliant Half together; Ditiro surpassed his expectations as he was running injured; Ndiye did her first Diacore in a fantastic time; and my dad had an awesome time too, proudly taking down many youngsters! Another friend Sonja did her first Half and I’m so proud of her. I didn’t see Malcolm and Tshepi at the end, but they also had great races. I spotted Fuzzy who gave me a huge hug and thanked me for running with her for the first half of the race. I felt really proud. But I think having her with me for 10km also helped keep me focused before I set off on my own. 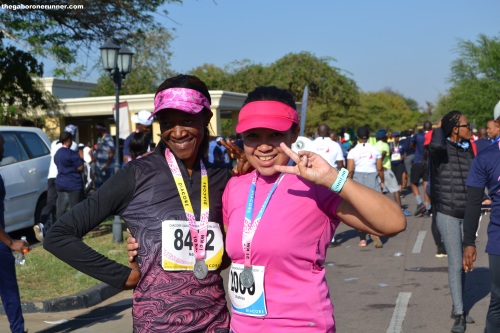 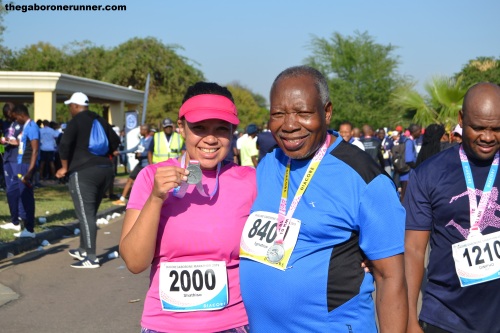 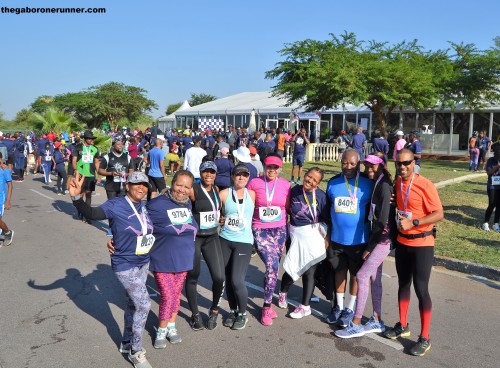 I am joining the lovely and inspirational Kooky Runner and Zenaida who are hosting the “Tuesday Topics” link-up. Hop on over to their blogs and others, and be inspired!