I’m on a mission to hike in four different places in Botswana as part of my #40By40 Challenge. My first two hikes were in the south-east of the country – the first was a lovely hike in the Mmamotshwane Gorge with its majestic rocky walls and the second, an epic 6-hour hike in the hills of Otse. For my third hike, we ventured further afield to the Goo-Moremi Gorge situated in the Tswapong Hills in the eastern part of the country. The Goo-Moremi Gorge is a significant part of the Bapedi/Batswapong community and is considered quite sacred as it’s believed to be the home of the community’s ancestral spirits (badimo). The area has been declared a national heritage site and as such its protection and management falls under the Botswana National Museum. This means that hiking in the area can only be done with a guide and there are a number of rules to follow, for example, no whistling, littering, making noise or use of flash photography in some areas. The Gorge is also very important as it hosts breeding sites for various bird species most significantly, the endangered Cape Vultures and Black Eagles.

On a Friday afternoon, we loaded the car with our tent, camping gear, hiking shoes and two very excited kids and headed to the village of Moremi, a 4 hour drive on the A1.  After Palapye, we took a right turn onto the Bobonong Road and an hour and a few more turns later, we got to the village of Moremi and followed the wooden signs to the Gorge. It was only a 5km drive but on the gravel road and through the beautiful orange mophane woodland it felt a lot longer.

After the check-in formalities, we made our way to our campsite where one of the guards helped us get firewood and set up our tent. It was a huge and secluded space with a towering morula tree as its centrepiece. Although I was there for the hike, my husband and kids were there for the camping so they were really excited. But I must admit when I saw how neat the ablution block was with a hot shower and toilet as well as a barbeque stand with a sink and counter space plus the option of light, I was impressed! After supper, we hit our sleeping bags and fell asleep to the sounds of rustling leaves and baboons barking in the distance. The following day after some hash browns and bacon for breakfast, we were ready to hit the trail. 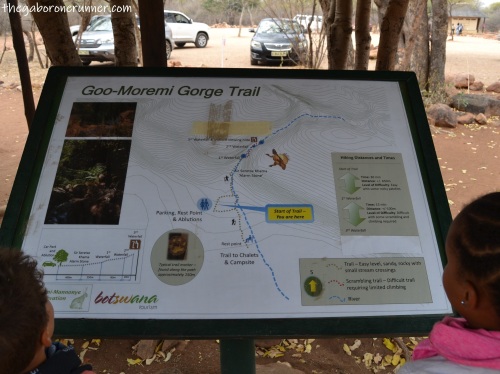 When we got to the start of the trail, we found a small group already assembled. In total, we were about 15 hikers, all kitted out in masks. Next to us was a huge mowana (baobab) tree. After the guide had welcomed us and given some rules and instructions, we set off.

What I Loved About Goo-Moremi

The Unique Habitat. Botswana is generally quite dry with little rainfall in most parts of the country, so much so, that our currency Pula actually means rain. So it’s hard for me to describe the feeling of excitement as we started the hike and almost immediately encountered a natural spring. The guide jokingly said some people ask him whether this spring is the waterfall! It felt as if we were in another world – the foliage was quite dense and I can only imagine how forest-like it must look in summer! This is a very unique habitat with a variety of fauna and flora. There are several streams and pools with crystal clear water. In one pool, we spotted a brown frog and apparently there are also small fish and crabs that reside here. Brilliantly green ferns and papyrus plants lined some of the streams and figs grew in the rocks. 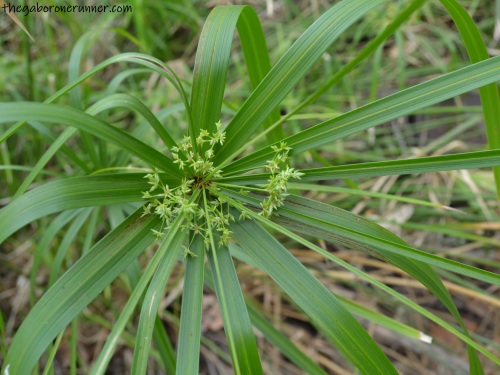 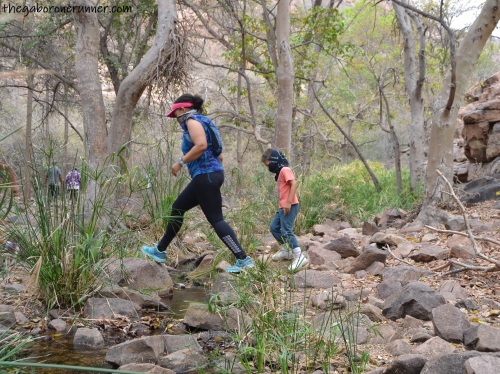 As we entered the gorge, we were surrounded by steep rockfaces. We heard and spotted some birdlife such as the grey lourie, woodpecker, yellow-billed hornbill and scarlet-breasted roller. The skies when visible were dominated by circling breeding vultures.

We also spotted rabbits, monkeys and baboons and saw droppings from eland, impala and zebra. The gorge also gets some visitors like the leopard, hyena, kudu, bush buck and porcupine.

Acrobatic Adventure.: The guide said at the start that the hike was not very long (about 45 minutes to get to the third waterfall where we would turn around) but he did warn us that it would be slightly adventurous! The trail was quite rocky and there were a number of stream crossings. I was worried about the kids slipping but they bounded gleefully across most streams not paying much attention to my shouts for them to be careful. 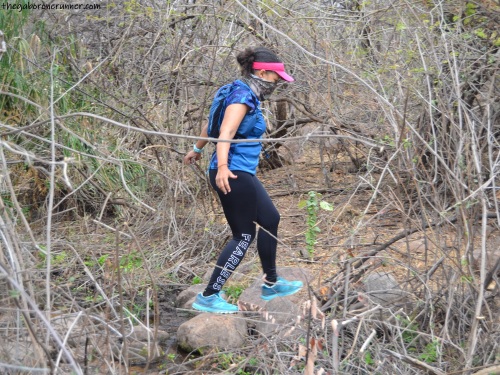 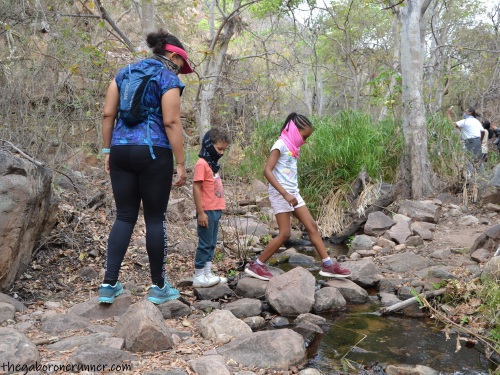 There were sections that involved clambering as well as use of strong cables firmly embedded into the rocks. The guide was always able to tell us which foot to use to get up or down certain sections which was extremely useful. My kids were lucky to get airlifted on occasion. 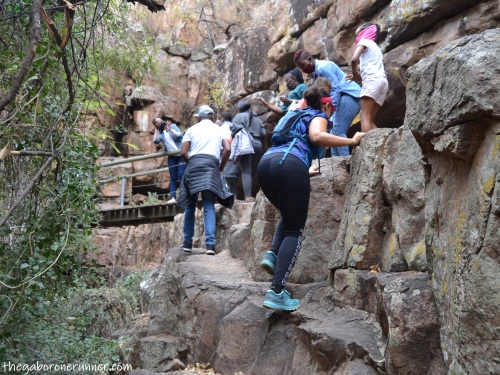 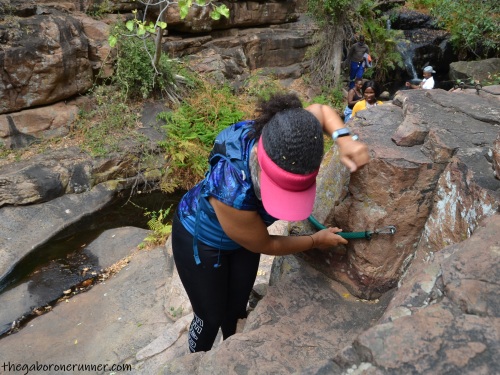 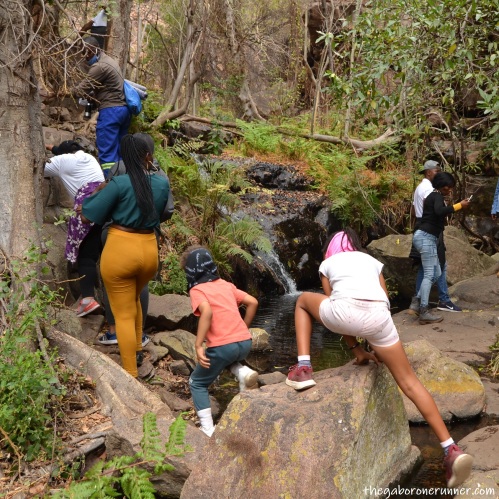 Just before we got to the main feature, there was some more adventure as we had to sit and slide across the rocks to get to the plateau where we found a huge pool of water and the gorgeous third waterfall. It was quite a magnificent sight and hikers scurried around, briefly pulling down their masks, for a photo op in front of the waterfall. Up above, several vultures circled and Ditiro spotted one sitting on a rock behind the waterfall. The guide explained that there was an option during the week (and when the vultures were not breeding) to go all the way to the highest cliff. This takes about 5 hours. He also said although the third waterfall is quite spectacular, going all the way up is an incredible experience and his personal favourite. 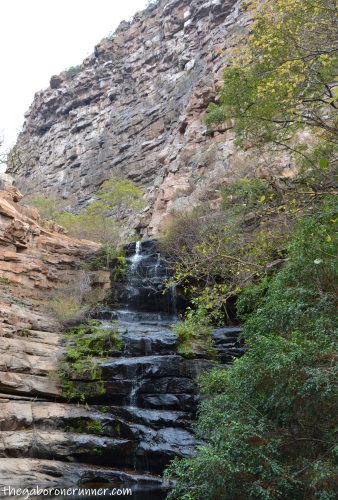 Cultural Connection. The sacredness of the area is largely due to the belief that this is where the Bapedi/Batswapong ancestral spirits reside. The guide explained that this was one of the reasons it took a long time for the community to permit walks and even when they did, they drew up strict terms and conditions. It remains a powerful force in the daily and spiritual life of the community. One of the features we encountered that show this connection was “Alarm Stone”. The story goes that on the morning of the 13th July 1980 between 2am and 5am, a loud rumbling noise was heard by the villagers of Goo-Moremi as this stone fell from the gorge above. The falling of the stone is said to signify that someone of great importance has passed away. The elders and the Komana (mediators between ancestors and community) knew then that the great chief had died and that it was Sir Seretse Khama, the founding President of Botswana. Later that morning it was reported that the President had indeed passed away. 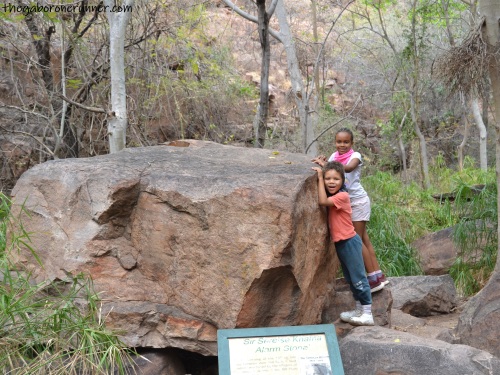 Family Fun. This was actually our first camping trip as a family and although I am not much of a camper, I really love that we chose this option over the chalets. The kids were in their element and particularly loved the monkeys swinging from the trees over our campsite. My husband loves being out in the bush and fresh air. Food cooked on the open fire just tastes ten times better and roasting marshmallows after each meal including breakfast was an added treat! 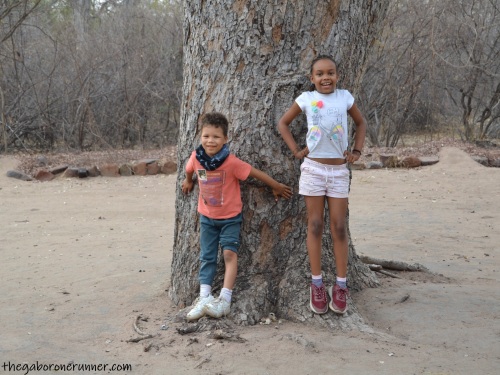 Bonus! We had the option to relax after our hike but knowing that the area was steeped in such historical and archaeological heritage we were keen to explore further. We had read about Old Palapye from a great travel blog and found that it was in a village called Malaka, about an hour’s drive from our campsite. The drive to Malaka was mostly on gravel road and when we arrived, we contacted Cisco, the name of the museum guide we had found on the travel blog. We were relieved that he answered the phone and was able to take us to Old Palapye. Old Palapye was an area that Khama III established in the 19th century as the capital of the Bamangwato tribe. However, their stay here was very short-lived as after only 13 years they were forced to abandon the place because of water shortages. They moved to Serowe which was the birthplace of Sir Seretse Khama. The first ruins we found were of a marketplace and stables. 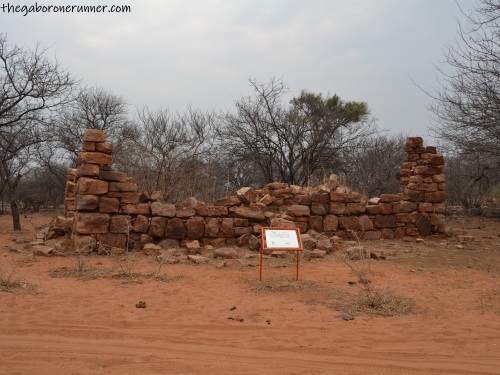 But this paled in comparison to the magnificence of the London Missionary Society Church, built from 1892 – 1894. It looked so majestic and I can’t believe how much of the structure still stands given its neglect for so many years. With plans to turn it into a museum, I’m really glad we got to see it before all the changes and developments happen.

Of course, a visit to a new place is not complete without a #IRunBotswana run! The following morning before heading back home, we ran 11km through the village of Moremi much to the amusement of the kids in the yards we passed. We set off a bit late so were very grateful for the cloudy sky and cool breeze. It was the perfect way to end a fantastic weekend away from home. 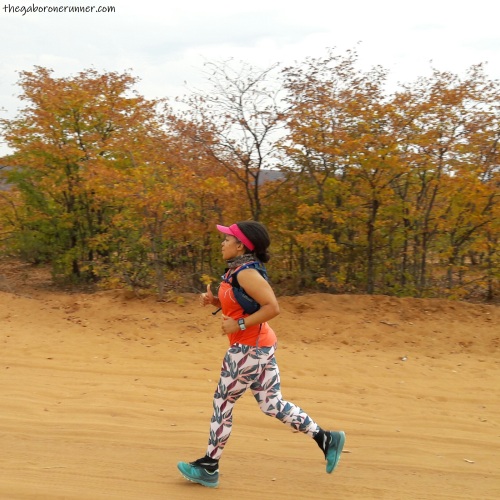 Have you had any beautiful hikes lately? Do you enjoy camping? Do you run when you get to a new place? Are you doing things you wouldn’t really have thought of doing pre-COVID-19?

I’m joining two amazing runners, Kim from Running on the Fly and Deborah from Confessions from a Mother Runner for their link up, the “Weekly Run Down”. Hop on over to their blogs and others, and be inspired!

39 thoughts on “Our Adventure In Goo-Moremi Gorge”