Botswana is a popular tourist destination but its capital city Gaborone with its government ministries, shopping centres and suburban sprawl is often overlooked as a place of interest. I would argue that although it doesn’t have the vibrant feel of some of Africa’s big cities, many fall in love with its relative calm, cleanliness and urban conveniences. The more I’ve run the streets of Gaborone, the more I’ve grown to love its somewhat disjointed layout, interesting nooks, hidden art displays and flat terrain. I’m also filled with a sense of pride that Gaborone, only a dusty little train stop nestled in the bush in the 1960s has developed so remarkably, at one stage considered one of the world’s fastest growing capital cities. So in this new series on the blog, Exploring Gaborone On The Run, I’m going to showcase some of my favourite running places. Hopefully it encourages other runners in Gaborone to venture out of their comfort zones and that it helps visitors discover interesting spots, often underplayed in travel books.

Let’s Greet The Chiefs: The Three Dikgosi Monument is situated in the Central Business District (CBD) of Gaborone and is a great first stop for anyone visiting the city as it provides some historical background of how Botswana became a British protectorate in 1895 and how it gained its independence in 1966. Surrounding the monument are various bank headquarters, businesses, the High Court of Botswana and several Government ministries and departments. The buildings have different styles and modern architecture and include the tallest building in Botswana, the 27 storey iTowers 2. When I started running, I did weekly runs here with my cousin who was working in the area. So if you’re looking for a short run after work and don’t mind a couple of loops, it’s a safe place to run. If you’re doing a long run, it can easily be included as part of your route as its centrality makes it easily accessible from multiple areas in Gaborone. 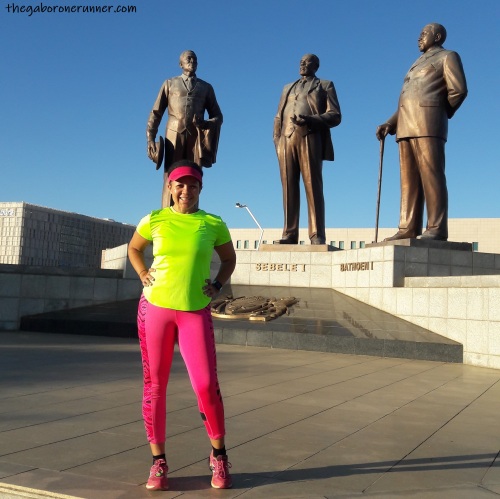 Take Me To The Mall: One of my favourite running routes is through the Main Mall. I usually enter it from the side of the Civic Centre (below) and then run right through to the other side.

Built in 1963, the Main Mall is the official centre of the city with shops, banks, business offices and an open walkway with seasonal shows and exhibitions as well as selling of crafts and various farm produce like morogo (wild edible leafy greens), beans, pulses, grains and the local delicacy phane (mophane caterpillars). It’s also where you’ll find my favourite street barista Perfect Roast Coffee Kiosk if you’re looking for a wholesome cappuccino after your run.

The Main Mall once housed Gaborone’s first cinema and it still has one of the older hotels in the city. The Cresta President Hotel, in the photo below, features quite prominently in Alexander McCall Smith’s famous No. 1 Ladies’ Detective Agency novel series where the protagonist Mma Ramotswe spends many hours investigating and drinking Rooibos tea. 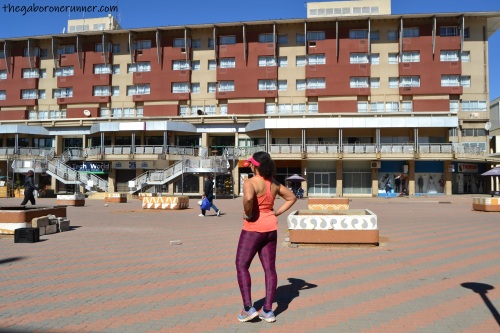 As Gaborone grew and shopping malls started cropping up all over the ever expanding city, the Mall’s popularity subsided. It still remains a bustle of activity with some of the older High Commissions situated here like those of Great Britain, Zambia and Nigeria. But a lot more needs to be done to resuscitate it so that it remains the heart of the city whilst not losing its free spirit and authentic feel especially given its strong historical relevance to Gaborone.

The Government Enclave: From the Main Mall, my run usually takes me across Khama Crescent and into the Government Enclave which is where most of the ministries are located. Whilst the run through the mall leaves me nostalgic, the run through the Enclave leaves me feeling patriotic. It is where you’ll find the Statue of Botswana’s First President Sir Seretse Khama, erected in 1986, as well as a memorial for soldiers who served under the British Army in World War II. Guarding the Statue is also a tribute to the Botswana Defence Force (BDF) soldiers who fell in an engagement during the war of liberation in Zimbabwe (then known as Rhodesia).

Directly across from Sir Seretse Khama’s statue is Botswana’s National Assembly or House of Parliament which is quite a simple and understated building with several small arches, a fountain/ water feature in front and a small tower clock chiming on the hour. 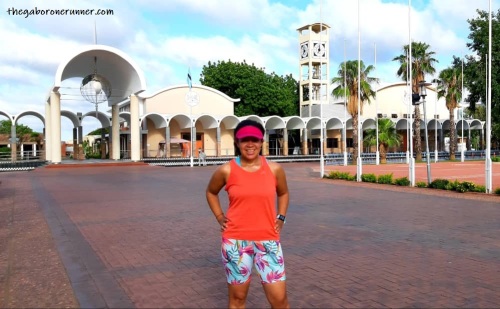 The enclave is an eclectic mix of old and new buildings. For example, the Office of the President, Ministry of Environment, Wildlife and Tourism as well as Ministry of Local Government and Rural Development still occupy some of the older ‘traditional office block-type’ buildings.

And the Ministry of Health and Wellness, Attorney General’s Chambers and Directorate on Public Service Management, among others, are housed in more modern looking structures.

Fairgrounds Office Park: This office park is on the other side of town for me and therefore not an area I frequent too often. In fact, I think the first time I ran here was when I did the Botswana Life Half Marathon in 2019. I found myself there again a few weekends ago when chasing a photo next  to the Botswana Development Corporation (BDC) Fairscape Precinct building! Completed in 2014, this building is a multi-storey diagonal-grid office block on a pre-cast concrete frame. It has 15 floors of offices and penthouses in The Tower as well as two free standing office blocks around a central piazza. The piazza was designed to host exclusive retail stores and high-end restaurants. Whilst there, I was quite impressed by the quiet roads outside the office park which must make great running loops for people working in the area. 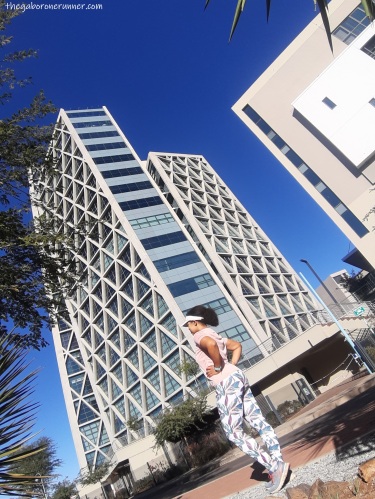 The Airport Road: This is an out-and-back route from Airport Junction Mall to Sir Seretse Khama International Airport. Although some runners turn back at the boundary, I enjoy making my way round the 1km loop inside the main gate so I pass the airport entrance. Admittedly, this is not my favourite route as I find it quite boring but I’ve included it here for a number of reasons – firstly, it provides a beautiful stretch of road with minimal intersections allowing for mostly uninterrupted training. Secondly, it’s a very busy route so if you’re alone you’re guaranteed to pass many walkers and runners especially during weekends. Along the Airport Road there are a number of organisations like the Botswana Bureau of Standards, Botswana Innovation Hub, Bank of Botswana and the Diamond Trading Company Botswana which is the world’s largest and most sophisticated rough diamond sorting and valuing operation (photo below). 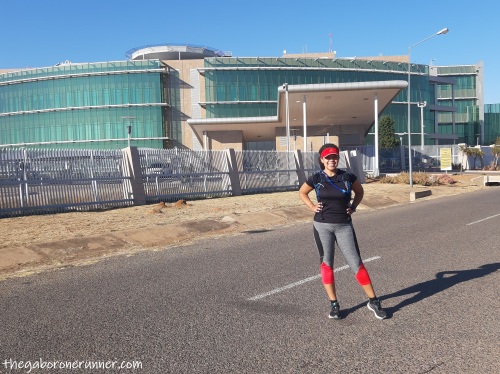 Bush Bashing in Mokolodi: Many Gaborone runners looking to do hill repeats travel about 15 minutes out of the city to Mokolodi where there is a lovely uphill stretch perfect for that. However, not many runners seem to be aware that inside the Mokolodi Nature Reserve are beautiful 5K and 8K running trails. Established in 1994, the reserve is home to many different mammals, including some rare and endangered species as well as a diverse array of reptile, amphibian and bird species. The run through the reserve is so refreshing and if you’re lucky you will spot various antelope, giraffe, spring hares and big tortoises. It’s a fairly non-technical trail so not very difficult for runners new to trail running but you still have to watch your ankles as people (including myself) have been known to take a tumble! Running in the reserve is free if you have membership, otherwise there is a small fee. You also need a running partner with you.

I can’t tell you how excited I am to be sharing Gaborone with you from a runner’s perspective. I will be back soon with routes and tales from other parts of Gaborone including the pulsating bus and train stations, a historic route which includes the Old Prison and gallows as well as some of the less pretty sections of town and a few hidden gems I’ve found on the run!

I’m joining Kooky Runner and Zenaida on their link up, Tuesday Topics. I’m also joining the Runner’s Roundup with Mile By Mile, Coach Debbie Runs, Confessions of a Mother Runner, Runs with Pugs, Running on Happy and Organic Runner Mum! Be sure to read their blogs and catch up with other runners from around the world.

31 thoughts on “Exploring Gaborone On The Run – 1”