For those of you reading this blog for the first time, I am on a mission to complete 17 races this year! Yesterday I ran my 5th race in Palapye which is a 3-hour drive from Gaborone. This race also served as part of my training for my goal race next week – The Diacore.

We left Gaborone at around 15:00 on Saturday afternoon, picked up our good friends Polelo and Paul, and had an enjoyable drive to Palapye with lots of chatting and dodging of crazy bus drivers. Palapye is a fast growing town, situated about halfway between the two big cities, Francistown and Gaborone. Its strategic position makes it a convenient stopover on one of Southern Africa’s principal north–south rail and road routes. The Morupule Colliery coal mine is located here, and supplies Morupule Power Station, Botswana’s principal domestic source of electricity.

It is also home to one of Botswana’s largest universities, Botswana International University of Science and Technology (BIUST). Our drive was uneventful and we arrived at the Majestic Five Hotel at around 18:00.

We had a lovely dinner before heading off to bed. For some reason I had put a lot of pressure on myself for this race, so I had a restless night as well as a headache which fortunately had worn off by the time I got up at 6am.

The Race: The starting point of the race was at our hotel so there was no big rush in the morning. After eating some cereal and getting dressed, we headed down to the Start for our warm-up. Unfortunately, this race was so poorly organised. I don’t want to be too scathing in my attack because I know a lot of work goes into preparing for a race… but… it was a huge disappointment. Race bib collection was from 6am – 7am on race morning but by the time we got there at around 06:30am, they had run out of race bibs and t-shirts stating that they had only made enough for 93 participants. Did they not know how many tickets they had sold? There was no attempt at an apology and we were simply told that we should run with our tickets and then show people our tickets as we finished. To make matters worse, we were supposed to start the race at 07:30 but only set off at 08:11, 41 minutes late.

Ditiro was running this race alongside me and in the week leading up to the race we had “talked race strategy”. I knew I wanted a 2 minute PB which meant running an average pace of 07:19 min/km. This was a slightly faster pace than I had done in training so I was a bit sceptical that it could be done. We agreed that as I always do the second half of the race faster than the first half, I should aim for 37.5 min for the first 5km, leaving me with 35.5 min to get back, to finish in a time of 1:13 hrs. The plan was clear. However, I started the race around 07:00 min/km and Ditiro even said to me, “This is a bit faster than we are supposed to be going”. At that point I thought to myself – “Well, this is really a training run. I feel so comfortable. I am talking nicely, my breathing is okay, my body feels good. So let me stick to this.” And stick to it I did! When we passed the clock at the station we were at the 5 km mark, and were 1.5 minutes faster than we had planned for. My slowest pace (per km) was on the incline where I did a 07:17 min/km pace, still faster than the average pace I had planned for.  With 1.5 km to go, I turned it up a notch and headed for the finish with a pace of between 06:53 and 06:04. 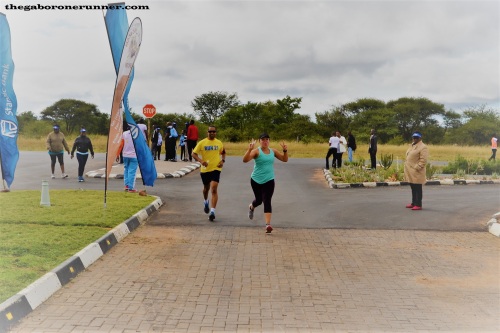 My time: I ran the course in 1:08:02 – a remarkable 07:09 minutes Personal Best, and smashing my Goal A which was to do it in 1:13:11! I was in complete and utter shock that in just 1.5 months I have improved so much. This was not my goal race and because of the complete chaos of the race, there were no official times, but I am claiming this “unofficial” PB! And of course, there were not enough medals to go around so these photos next to the race banner will have to do! No race bib, no medal – I promise you I did actually run and PB! LOL!

Cons of the race:

Would I do this race again? NO – for a race that had so much potential, it was a complete disappointment. But I will choose to remember it for my 7 minute PB and the phenomenal time I had with my friends!! 🙂

Some Shout-Outs: I am still one of the slowest athletes on the track but I have a phenomenal team behind me – Thank you to my dear friends Polelo and Paul for putting aside so many things to join us on this trip. Thank you to Paul for the great photography. Thank you to Ditiro for sacrificing his own race to run alongside me. Thank you to all my friends, those who run and those who don’t, for all your support and encouragement. Thank you to all the runner bloggers for your advice and kind words. Thank you to my parents and in-laws for taking care of the kids so we can participate in these races. Finally, thank you to Coach Nicola from Running Happy for giving me such focus, guidance and clear direction.

Once again I am linking up with the amazing Courtney at Eat Pray Run for the Training Recap and the awesome bloggers HoHo Runs and MissSippiPiddlin for the Weekly Wrap. I am also joining Patty, Erika and Marcia for Tuesdays on the Run. Linking up is such a great way to get motivated and to stay accountable! So please take some extra time to read some of their stories.