On the 7th May, 2017 I ran the Diacore 10k Race – my Goal Race and the 6th Race in my “17 in 2017 Challenge”. It was the first race where I found myself looking around and really enjoying myself… it was the first race, I felt I wasn’t faking it… I felt like a runner… in a sea of strangers I felt like I belonged. But I am getting ahead of myself…let us take a few steps back…

Eight weeks ago, I had just run my 3rd race of the year. That 10k race was the first I did without taking any walking breaks. That in itself was a victory and the new PB time I set of 1:15:11 was the added bonus. With my new found confidence, I started an 8 week training cycle to get me prepared for the Diacore which is Botswana’s biggest race and a qualifier for Two Oceans, Comrades, Commonwealth and the Olympic games. In those 8 weeks, I got a coach, Nicola from Running Happy, and I ran two races – the Lady K 10k trail run and the Palapye 10k which gave me a huge (self-timed) PB of 1:08:02. Going into Diacore I felt nervous but prepared.

I enjoyed a relaxing Saturday minus the kids who were at my parents’ place. In the evening we enjoyed a nice pasta meal before heading to bed. In the morning, I had my usual shower to warm up the muscles and my cereal before we headed out at 05:20. On the drive to the venue I made a mental note of the Route:

The Route: They call it the flattest and fastest race in the region and aside from a gentle incline at the start, it really is. Grand Palm – Right onto the A1 – Left at the Rainbow Circle – Left at the Nokia Lights – Left at the CBD Lights – Grand Palm.

The Race: We only found parking about a km away from the start of the race. We tried waiting for Tapiwa but with all the crowds we quickly realised it was a futile exercise. So I walked Ditiro over to the Half Marathon Start and then headed for the loos where I found a long queue of runners. Knowing that I had to warm up my knee to ensure a good start, I started vigourously stretching in the bathroom. I swear, the others must have thought I was one of the elite runners! LOL. With just a few minutes to spare, I took a slow jog to the Start and my knee felt okay. Unfortunately, the long wait at the bathroom meant that I started quite far back. At exactly 06:30 the gun sounded and it took me 3 minutes to get to the Start Line.  After that I had to wade through several walkers so my first 3 km were not the most enjoyable and I struggled to get into gear (Splits, min/km: 06:51/07:41/07:29). However, just after the 3 km mark I found my stride and really started to enjoy myself. I felt truly happy to be out here doing this. I looked up and saw a man holding a banner, “Run it like you Stole it” and I burst out laughing giving him a thumbs-up. I waved at the cheerleaders on the track with their pompoms and as I started having fun, I started feeling stronger and my Splits for 4 – 7 km reflect that: 07:04/ 06:50/ 07:05/ 06:49. As I headed into the last 3 km, I turned it up another gear and remembered my pilates breathing to get me through the final stretch:

As I saw the finish line, I still had enough energy for my final sprint and despite some pain in my left knee I just pushed it until the end. I was elated and on the longish walk down the “passage” to get my medal, I truly felt like a runner. It being such a big race I didn’t see anyone I knew at this stage, and Ditiro still hadn’t finished his Half Marathon so it gave me some time to reflect and enjoy my moment. As I got my medal, a guy tapped me on the shoulder from behind and said, “You ran such a good race. You had such a consistent pace and were my pace maker for most of the race”. And that my friends was the cherry on top! 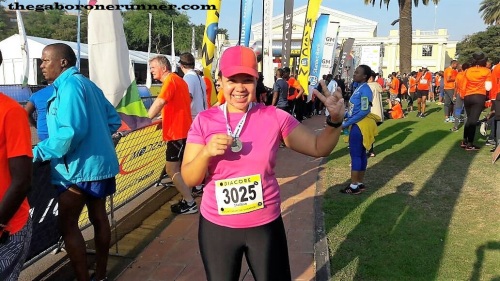 My time: I ran the course in 1:10:24 (07:01 pace) according to my watch which I started at the Start Line, 5 minutes faster than my last officially timed race. Unfortunately, when the official race results came up, they had recorded our times from the gun start (and not from when we actually crossed the Start Line). So the 3 minutes it took me to get to the start are now included: 1:13:11.

After the Race: I found a good place where I could watch the Half Marathon and Marathon finishers. Thankfully, my cousin Tapiwa soon found me and we chatted as we waited for Ditiro and our friend Elisa who were both doing the Half Marathon. At 1:42:12 Ditiro came through at a blistering pace and we started screaming, “D!! D!! D!!” and then we waited for Elisa who had such a strong finish and a 20-minute personal best! We were later also reunited with Polelo and were all so happy with our personal journeys. The Half Marathoners had some entertaining stories of Concert Goers who had decided to go straight from the Concert Venue, drunk as ever, to some parts of the course to cheer on racers with their camp chairs and cooler boxes! 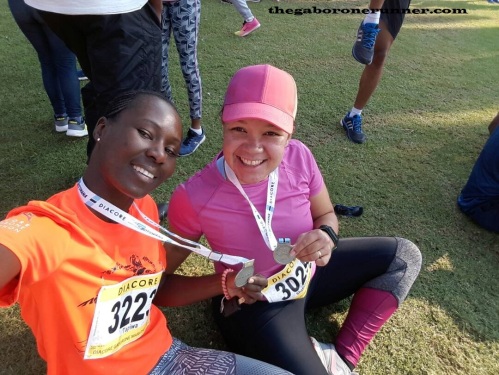 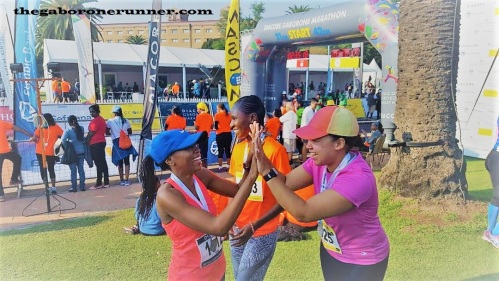 Pros of the Race

Cons of the Race:

Would I do this race again?

Oh yes!!!  For any Gaborone Resident this race is so much more than just a race. I am so proud to have been a part of it this year and to have run such a strong race. I will definitely keep coming back!!

Once again I am linking up with the awesome bloggers HoHo Runs and MissSippiPiddlin for the Weekly Wrap! I am also excited to be linking up with Patty, Erika and Marcia for Tuesdays on the Run! Linking up is such a great way to get motivated and to get to know other bloggers! So please take some extra time to read some of their stories and link up if you can!