After three weeks of indulging (more like OVERindulging) the first thing I noticed  this morning is that the dress I am wearing on my first day back at work is very snug! 🙂 So it is back to work in all senses of the word! I hope you all had a great festive season and that this year is filled with lots of love and laughter for you and your families. I have not blogged in a few weeks and there is just SO MUCH to say – first of all, I owe you the final two race recaps from my 17 Race Challenge in 2017! Yes, I am ecstatic to say I did accomplish my goal of running 17 races last year! It was such an epic journey and when I was in the last few kilometres of my 17th race so many emotions washed over me, at times making it hard to breathe as I ran. 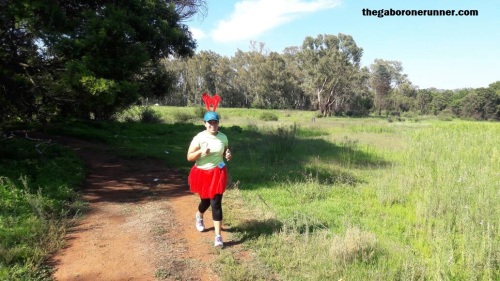 So it will be important for me to take some time to write about my last two races in 2017 and also what I gained from the whole 17 race experience. But in that process I don’t want to lose focus of what I am currently doing so I will continue to write my weekly recaps. My goal this year? To Run My First Half Marathon. To keep me accountable I will be linking up with the inspirational Holly from HoHo Runs and her fabulous new co-host Wendy from Taking the Long Way Home. Both these women have inspired me with their pearls of wisdom as well as their grit and determination to get stuff done. Be sure to check out their blogs too!

I never thought a Half Marathon was on the cards for me. Me? Run a Half Marathon? Not likely! But after a year of reading others’ blogs and seeing myself grow as a runner, the idea really started to take shape. A lot of people kept asking if I was going to do an 18 Race Challenge and although I toyed with the idea, in the end I wanted to focus on quality over quantity. Sometimes in checking races off my list, I lost track of actually working towards becoming a better runner. Once I was certain that I wanted to do a Half Marathon, I contacted Coach Nicola from Running Happy and we agreed to start my 19 week training plan on the 1st January. My goal race is the Diacore Half Marathon which will be held in Gaborone on the 13th May 2018. I did the Diacore 10k last year (recap here) and I am so thrilled that I will be taking things up a notch! I am nervous but also extremely excited as there is nothing right now that I would like to be working towards more. So… let’s do this 🙂

I always dread my first run after a bit of a break but this one felt really good. I ran my final race of 2017 on antibiotics so I think the break away from running was a good move.  On New Year’s Day, I woke up rather late and it was already 30°C by the time I had put on my shoes. So I was forced to use the treadmill with a fan blowing directly at me! The run went really well and my legs were on top form.

Coach Nicola has also introduced some little daily exercises to do each week that work on some of the fundamental movement skills (Agility, Balance or Coordination). This week it was balancing on one foot, left and right, for 30 seconds each and then doing it with my eyes closed too. Those went really well and towards the end of the week I was hardly wobbling!

The Grid “is a brand new offering from Virgin Active. We will teach you how to push, pull, squat, bend, twist and lunge. Six movements you’ve done your whole life, probably incorrectly”. Today the 6 stations were: squats with a kettle bell; bench press; lunges with weights; shoulder press sitting and standing; walking high planks; and transferring a cone from corner to corner.

Seemed simple enough but my friend Polelo had warned me that it wouldn’t be easy… It wasn’t easy at all. I am pleased to say I survived! I loved it because it was a proper strength and conditioning class using simple but effective movements. The photo below was taken just as the class was done but that was the last smile I had for a few days! The pain that followed was intense…

I had scheduled an early morning run with my cousin Tapiwa. She got to my house around 06:30 and we were off shortly after. I wasn’t yet sore but my legs were as heavy as lead and I was super slow. Thankfully, it was a beautifully cloudy day so we didn’t have to contend with the heat as well. 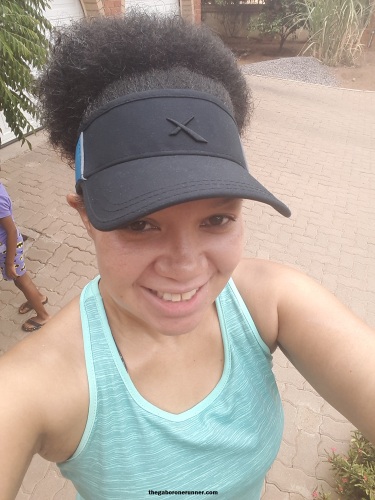 What a disaster. So the Grid workout on Tuesday killed me. I am so glad I scheduled a 06:30 am run on Wednesday because after that run I was just in a state of pain and shock. My kids were laughing at me because I could hardly walk. Bending down to sit was a struggle and bending to pick something off the floor was a no-no. Thank goodness for my little ones, they became my extra hands and legs. In the evening I was forced to take an ibuprofen and I sprayed arnica on the back of my legs. So… the gym class planned for this afternoon didn’t happen. This pain was such a huge wake-up call. I must admit I was disappointed – after all, I have been running for a year, how unfit can I be? But sadly many of my muscles seem to have been dormant and Tuesday’s gym class was a rude awakening.

Pilates classes hadn’t resumed after the holidays so I did a Core Conditioning Class (30 min). I dropped the kids at the Virgin Play Centre and did my class. It was quite an intense ab workout. I got through it but have a long way to go. I did my best though. Just looking forward to my best being even better! My body as a whole felt so much better but my left knee was a bit sore. Knowing I had a 5 km run scheduled for Saturday I iced it and “arnica’d” it before bed.

The Meteorology Office and the Ministry of Health issued warnings about a heat wave between the 6th – 8th January. It was already boiling hot before then so we knew we were in for it. I aborted my first run in the morning because it was insanely hot. At 8:33 pm it had only dropped to 33°C! At least I didn’t have to worry about the sun! A tough run but very glad I did it. Also, my pace was a bit quicker than Wednesday’s run. However, my left knee was not comfortable throughout.

Today was meant to be a spinning class but Sunday classes had not yet resumed… I must confess I was slightly relieved about that! hands over face

Grade: A- (Overall, I am very pleased with my first week. I am a tiny bit disappointed that I am so sore… have I really not been working on these major muscle groups?? Oh well, better late than never! I am glad that I did 5 of the 7 planned workouts and that I went for Saturday’s run even if I had to do it at night because of the awful temperatures.)

How was your first week of training this year? Do you also get excited about New Years that start on Mondays? Any major goals for the year? Are any of you in the Southern Hemisphere and struggling in this heat?

28 thoughts on “Journey to My First Half Marathon, Week 1”