The write-up of my 17th Race in 2017 is a little bit late – some of the details are a bit hazy but the emotions I felt as I crossed that final Finish Line are still so fresh. Quite by coincidence, my 17th race ended up being on the 17th December 2017! Here is the story of Number 17… 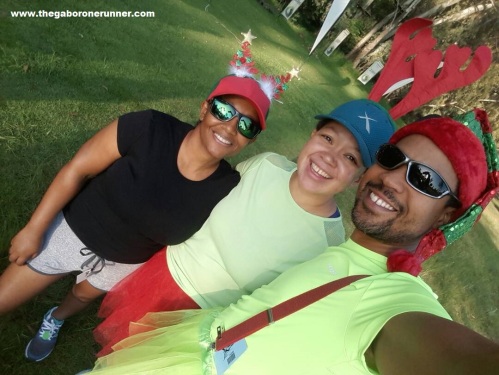 A Few Days Before the Race: “Doctor, I’ve had a runny stomach for four days. I challenged myself to run 17 races this year and my 17th is in a few days. I have to do it. Just make me better… please? Make it happen.” My usual doctor was not in, and writing this now I’m embarrassed to think what this new doctor must have been thinking when I told her all this! I ended up with a course of antibiotics. My last pill was to be taken on the morning of the race so I was definitely cutting it close. I missed out on the last week of training. Coach Nicola and I changed our strategy. No more time goals. The only goal now: FINISH! Finish what I started.

Road Trip: With no more races scheduled in Gaborone, my husband Ditiro, my dear friend Polelo and I travelled down to Irene, South Africa (about a four hour drive from Gaborone) for the Red Barn Christmas Dash. Polelo had also been battling a stomach bug and was still quite unwell. Fortunately, the journey was uneventful and as always there was lots of laughter. We stopped in Rustenburg for lunch and some shopping before heading on to Irene. 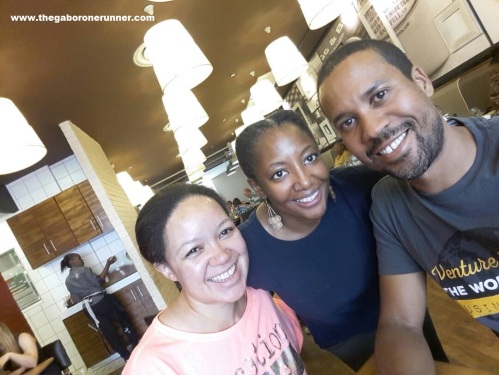 We had booked accommodation at the African Pride Irene Country Lodge which was a bit pricier than we usually would have gone for but we figured that some luxury was well deserved after 17 races! The hotel didn’t disappoint and our room looked out onto a beautiful lake with ducks, lush greenery with lots of rabbits and some guinea fowl, as well as a paddock with some farm animals. 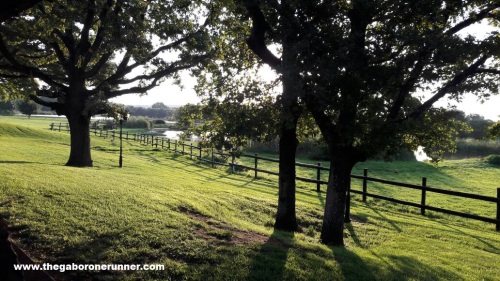 As we started thinking about dinner options we realised that I had forgotten my gluten free cereal at home. By the time we tried the Irene Shopping Centre it was already closed so we headed to Menlyn Park which we were all familiar with and was only a 20 minute drive away. We got our breakfast stuff and then headed to one of the restaurants where we enjoyed a lovely meal.

Race Morning: The race was scheduled for a 7 am start and we arrived at around 06:15 to collect our race numbers. There was a Tom Tom Sports Watch up for grabs for the best dressed person, hence our very Christmassy outfits! 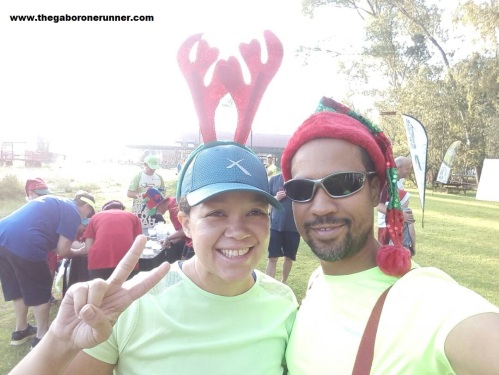 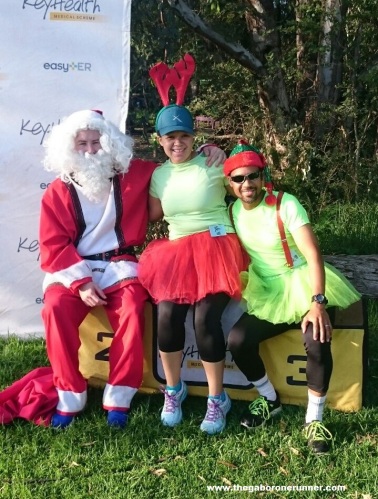 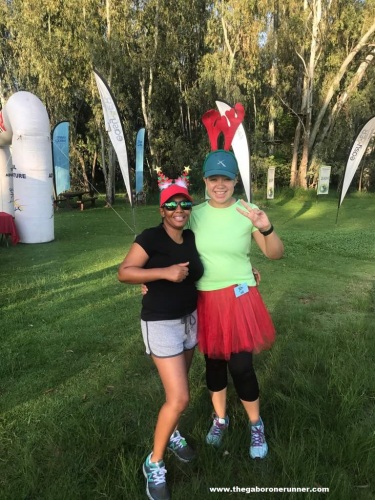 We looked out for our friend Karin who lives very close to Irene and who had been inspired by our 17 journey to run her first ever race! What’s even more exciting is that she didn’t tell her husband that she was training for the race and simply came back home later that morning with a medal around her neck! I was so proud of her and ecstatic that she was there for the last race! 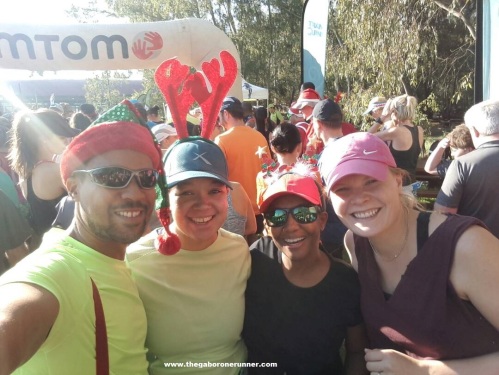 The atmosphere was buzzing and the Christmas Carols in the background complemented our outfits! 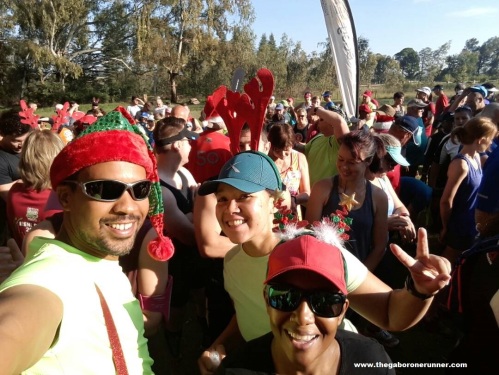 The Race: After the prize was given to the best dressed runner (not us?! how?!), the gun went off at 07:06. Polelo proudly wore the Team #17 t-shirt she had made for our 4th race back in April! How appropriate that it be worn for the FINAL race! 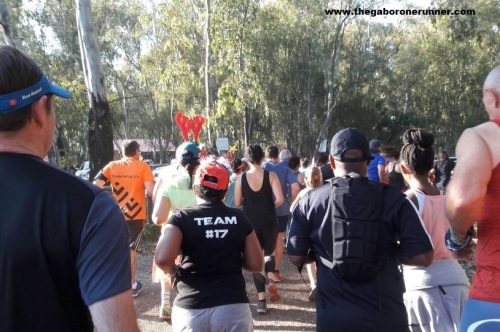 We all started together but there were 3 different distances, the 5 km, 8 km and 15 km. Ditiro and I did the 15 km distance together. He was my coach, motivator, punching bag and photographer all in one! Our route was well marked and we were never in doubt of where we were going. 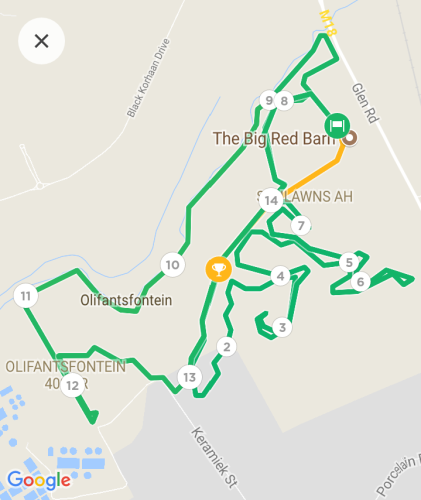 1 – 5 km: With the excitement of the crowd, the first km turned out to be the fastest of the race. The track was nicely padded with forest tree leaves and running among the trees kept us cool for long stretches. There were some long hairpin bends and even though the paths were often narrow, there were always some “overtaking” sections. There were a few ups and downs but not enough to slow us down too much and my overall splits for the first 5 km were: 07:51/ 08:17/ 08:11/ 08:13/ 08:35. In those first kilometres, I was a little bit nervous but also committed to doing this – I am here now. I am going to finish this race. My 17th race. 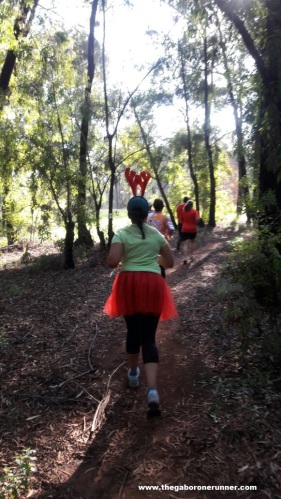 6 – 8 km: As the race progressed, there were fewer and fewer people with us. Some were way ahead, but those doing the 5 km and 8 km distances soon turned off to complete their races. My energy levels started waning and I walked for a little bit in one section even though it was quite flat. When we reached the 8 km turn-off point, I was disappointed that I hadn’t changed my distance when I still had the chance! My splits (min/km) were not too bad though: 08:43/ 08:23/ 08:33. 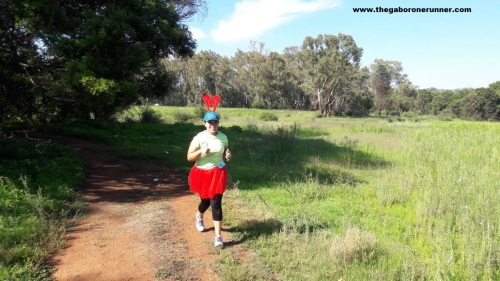 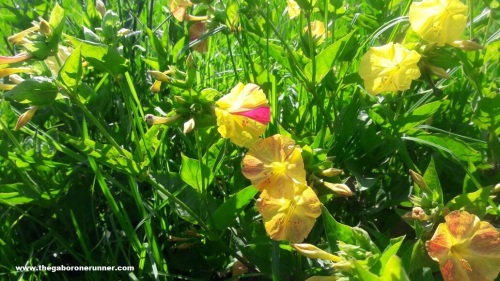 9 – 11 km: Things got a bit more adventurous after 9 km. We started jumping over logs and climbing up some steep bits. I was struggling a bit but the obstacles made things easier in the sense that I didn’t feel so guilty for going slowly. 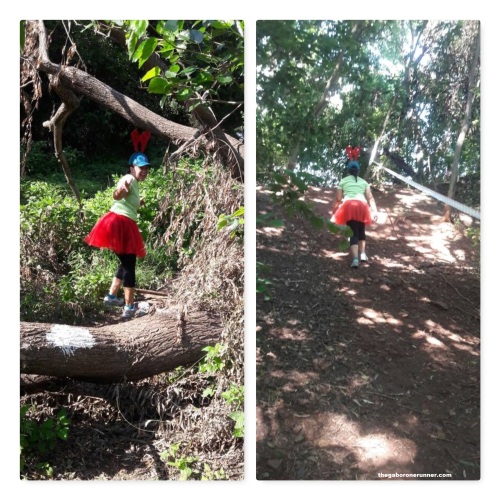 The change in terrain was lovely and in this stretch we found ourselves running alongside a river. The weeping willows were a sight to behold against that beautiful summer sky. My body was taking a beating though and I was soon forced to take some hydration salts. My splits (min/km): 09:26/ 11:10/ 11:26. 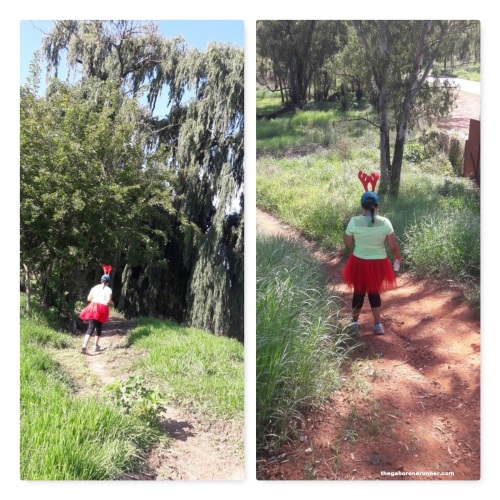 12 – 13 km: We had been alone on the track for so long that we were surprised to hear voices behind us. Two older men passed us and one cheerfully said, “Is it still Good Morning or should we say Good Afternoon?!” A lady wearing a very colourful wig soon overtook us too. There were so many pretty flowers and quite tall reed-like plants. I mostly walked even on the flat bits. I was starting to feel a bit defeated. My splits (min/km): 10:24/ 10:19. 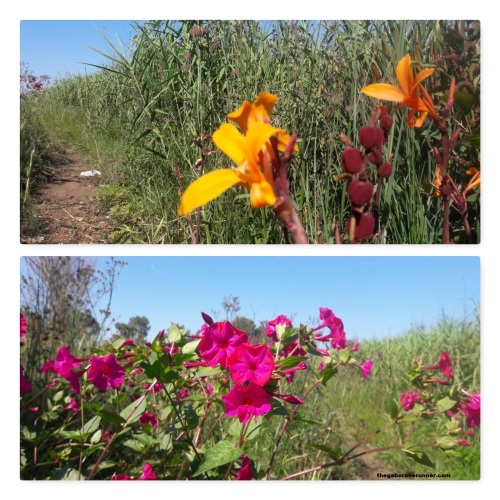 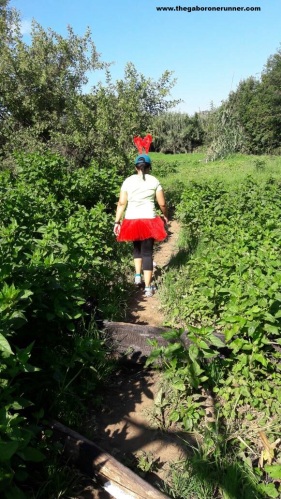 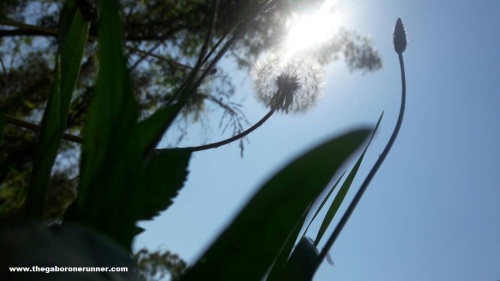 14 – 15 km: Those last kilometres were a bit faster as I ran more, 09:26/09:18. But they were tough because I was extremely emotional. At one point I cried. Not because I wanted to stop but rather because all I could think of was, I set out to do what seemed like an impossible task for a “non-runner” and here I am on my 17th race, not 100% well, but here I am. There were so many emotions – I felt happy that I had come this far, disappointed that I was sick, sad that the journey was over, but also relieved that I had done it. As the Tom Tom banner came into sight, I mustered up what last energy I had and put on my bravest smile as I made a dash for the finish. We could see Polelo jumping for joy as she held out her camera. Thankfully, she had survived her race too! The organisers were packing up and asked if there was any one else out there! We knew there were definitely four people but simply ignored their next question – “Did you guys get lost?” 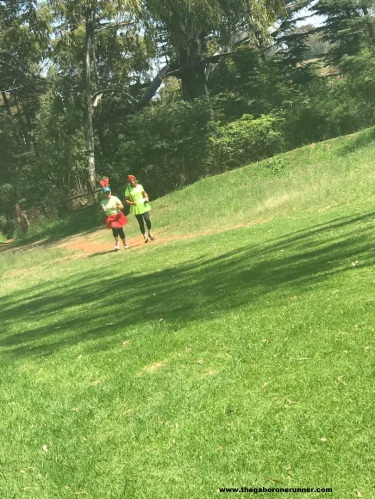 My time: I ran the 15 km course in 2:18:34 (09:15 pace).  I would like to say I was overjoyed that my 17 Race Challenge was done. But that feeling only came a few days later. Of course, I felt proud. Really proud of what I had done. But I also felt exhausted. Battered. I think my comment on Facebook immediately after the race speaks volumes: “There was so much I was going to say. So many pearls of wisdom I was going to share. So many thank yous to give. But all I can think of right now, at this moment is, “I did it.” 17 races in 2017. Mission accomplished. Over and out.” 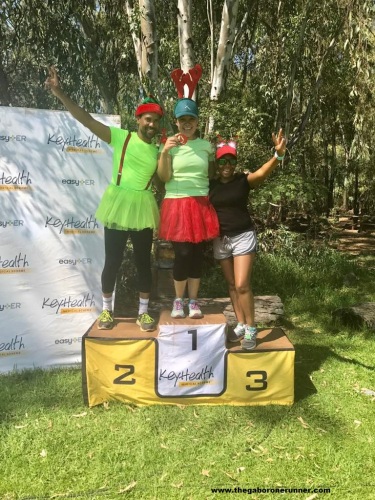 After the Race: Karin (a proud new runner) and her husband Modibedi organised a fantastic lunch at a restaurant in Centurion. We were also joined by our lovely friends Taffy and Tich who are based in Johannesburg. It was great to celebrate with them – all of them had followed the journey so closely and supported us through it all. It was heartwarming to sit there and say: Mission Accomplished. 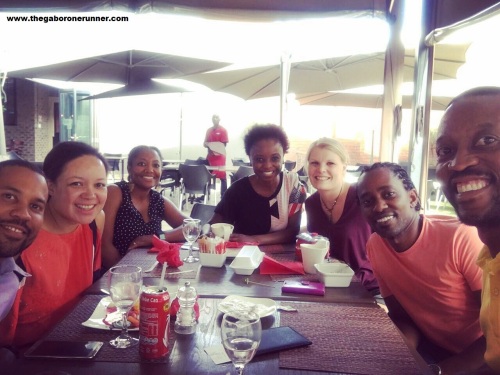 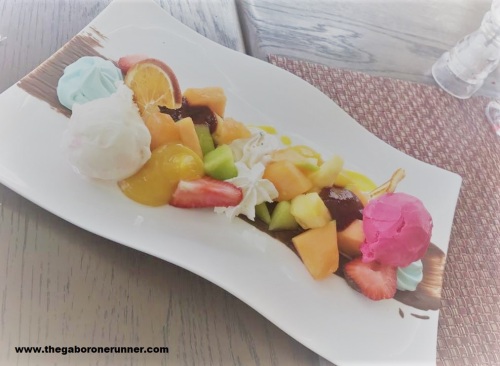 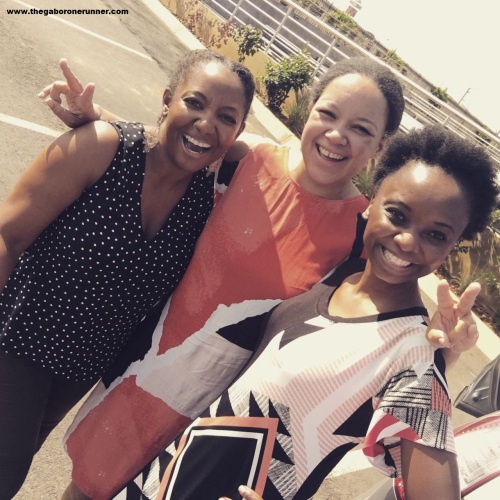 Acknowledgements: We ran. We ran again. And then just when we thought we had had enough, we ran all over again. To my running squad, I owe you my sincerest gratitude. Without your encouragement and commitment to the cause, I would not have crossed all those finish lines. Each one of you contributed so much to this journey and I drew so much strength and power from you. To all my friends and family around the world, thank you for your kind words at all times. To my parents for all the babysitting they had to do even on days when they had their own commitments, thank you for everything. To my kids who had to put up with, “I just have 7 minutes left on the treadmill, can you just wait on the toilet a little bit longer?” I thank you and I love you. To my husband, who had to put up with 2 am wake-ups to discuss whether my knee would be okay or whether the race strategy I had suddenly come up with was okay, thank you! To Coach Nicola, you have been my guide and the voice of reason, you have handled all my random challenges with absolute calm and wisdom. And finally, to all the blogger runners out there, thank you for your advice and your motivational comments when I really needed them. 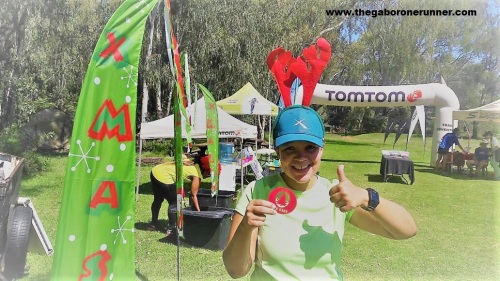 Even though this is a “throwback” Weekly Wrap, I am still linking up with Holly and Wendy as they followed so much of the journey last year! I am also linking up with Marcia, Patty and Erica for Tuesdays on the Run! Be sure to catch up on what all these fabulous ladies have been up to!