On the 28th and 29th September 2019, I (together with friends and family from Botswana) took part in Runtheberg – a 2-stage trail race in the magnificent Northern Drakensberg Mountains of South Africa. Luzibo and I chose the Challenge Race which was 17 km of climbing and running on the first day, followed by 14 km of more forgiving terrain on the second day, both days totaling a net ascent of approx. 1,140 metres. The rest of the Botswana contingent, Ditiro, Elisa and Tapiwa, chose the more gruelling Extreme Race which covered a total of 50km (net ascent of 2,400 metres) and had them canvassing steep slopes, narrow gulleys and water crossings. We were united in our determination to complete the race, but we ran separately, and each came back with individual tales of wild adventure, heroic feats and the experience of a lifetime. 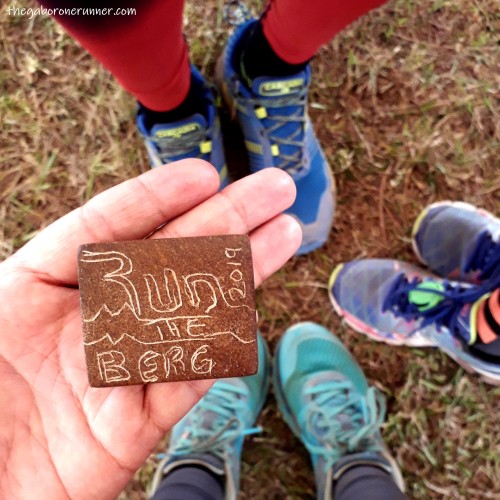 What Made RUNTHEBERG An Incredible Experience

The Warm Reception: After 8 hours of travel, we arrived at All Out Adventures just in time to collect our race packs and to attend the race briefing. On the drive, we had talked with great excitement about what was before us but aside from Tapiwa who had run the Berg before, we were not sure what to expect and there was definitely a fear of the unknown. But what stood out for me was this buzz of excitement in the air. Even though we were nervous, there was a sense of calm at the registration desk where the race team was very welcoming. The briefing was straightforward – they were honest about some of the difficulties we would encounter on the trail but we never felt as if it wasn’t doable. We were given clear instructions about the orange markers on the trail and assured countless times that it would be impossible to get lost. This was particularly reassuring for me who has been known to get lost at the local parkrun!

The Majestic Mountains: We had been really worried about the weather and Tapiwa had warned us that it could get cold. But when we got up on Day 1, we were greeted with sunshine and this was comforting to us as we know a little bit about running in the heat! We got to the Race Village and were greeted by race organiser Warren King. He was very excited to see us and happy to oblige when we asked him to take our group photo. The first day of the race started at The Cavern, a few kms down the road and we were shuttled there in mini-buses. 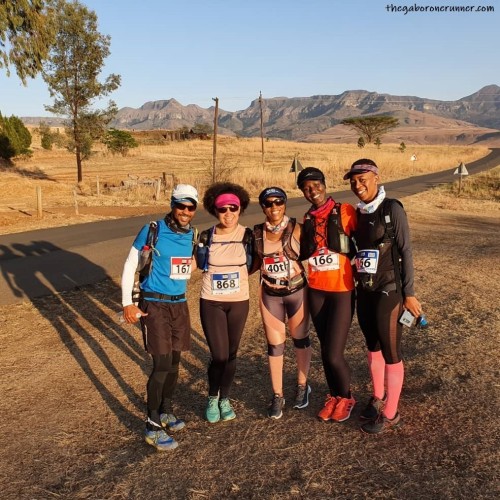 At the start of the race, we left in self-seeded batches, and when it was my turn, I took a deep breath, reminded myself that I had done all I could. The race website gives a great description of the route so I won’t say too much but to summarise we set of through the Fern Forest and eventually followed “the bridle path below the sandstone cliffs around to The Cavern’s Top Dams and the highest point of the day’s route”. I don’t think anything quite prepared me for the climbs. It was tough and sometimes technical but with each pause, I just had to look around to see the spectacular views. Nothing had quite prepared me for such unadulterated beauty. The last bit of Day 1 was a narrow mountainside switchbacks where I felt more in my comfort zone as it was really runnable. At registration I had seen a poster with Sir Edmund Hillary’s words, “It’s not the mountain we conquer but ourselves” and this really resonated with me. I’m not an experienced trail runner and have openly spoken about my struggles with trails, but on this day I smiled and I felt the mountain smiled with me. Luzibo commented that “when I was out there on the mountain, it was just me and my soul and I was one with nature.” 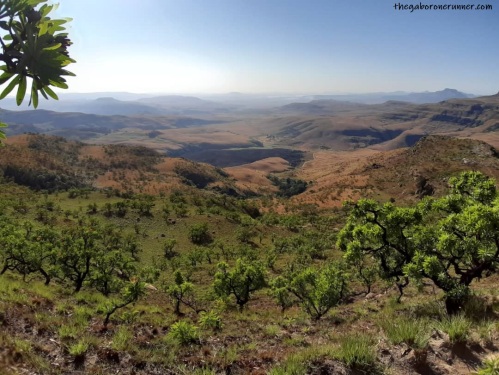 It was great to find Luzibo waiting for me back at the Race Village. We took some photos but our main focus was on rehydrating and stretching as we waited for our Extreme Team to arrive. 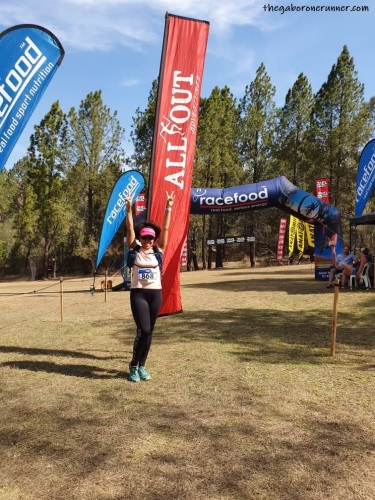 When they finally came in, dirty from the trail and parched from the sun, they had incredible stories of ladders and caverns. Elisa said it was “frightening and yet mind blowing” and added that “I have never done anything more physically challenging than Run The Berg in my life”. She found the most challenging part of her race was “going down the very steep slopes and the fear of sliding down the mountainside and falling to my death”. Ditiro spoke of the intensity of the heat as well as the “gruelling, steep climbing”. And Tapiwa had her own tales of adventure and mishaps, including taking a wrong turn and having to clamber her way out to get back on track. 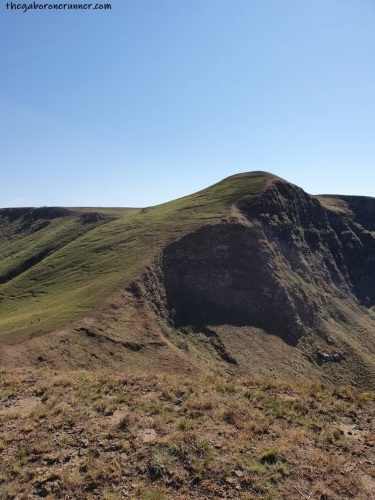 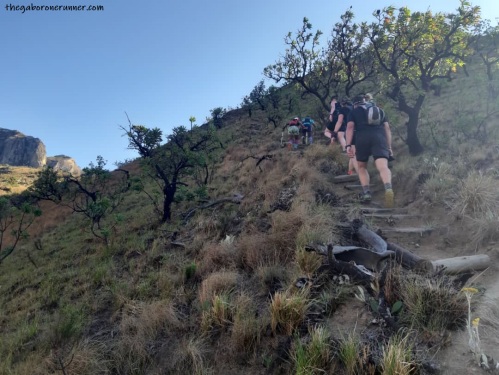 But once we were all back safe and sound, albeit a bit battered, we had nothing but smiles for an incredible day of adventure. We spent the evening foam rolling and getting ready for Day 2.

The Peaceful Valleys: Day 2 started and finished at All Out Adventures. Sore and bruised from Day 1, we were relieved at the rumours that today wouldn’t be as tough. And indeed, I found it a lot more runnable and although less exciting, more enjoyable. We meandered down some switchbacks. At the first river crossing, I managed to use the rocks to my advantage and avoided getting my feet wet. I think it was shortly after this that I encountered some galloping horses. There was some climbing but no where near as tough as Day 1 and although I was still tentative on the downs, I was more in flow than on Day 1. There was one more river crossing close to home and a final run through the forest, before the final hurrah!

When the last one of us had come through, we took another group photo – we were still smiling although at this point our bodies were crying for a cold bath! 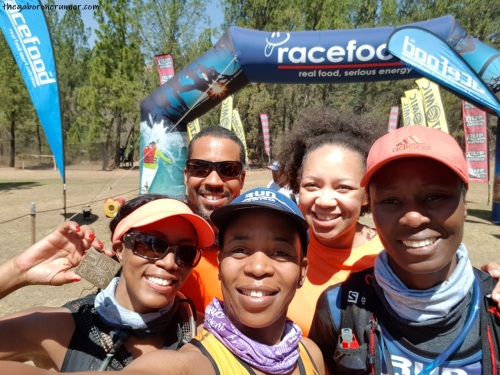 Evoking Powerful Emotions: There is something quite special about being in the mountains, challenging yourself physically, navigating unchartered territory, and dealing with random thoughts and powerful emotions. In my quiet moments, I thought about my family, my job, my kids, my fitness journey. I also thought about my mum and how as a girl growing up on the west coast of Norway, mountains were so much a part of her life. I felt proud for having the courage to do this just a month after her passing. I also felt proud of the friends I had come with who had done so well not to give up, even when they were struggling or hurting. That they pushed through to the end. Luzibo summed it perfectly when she said, the experience was “exhilarating”. And that it was, in so many senses of the word. 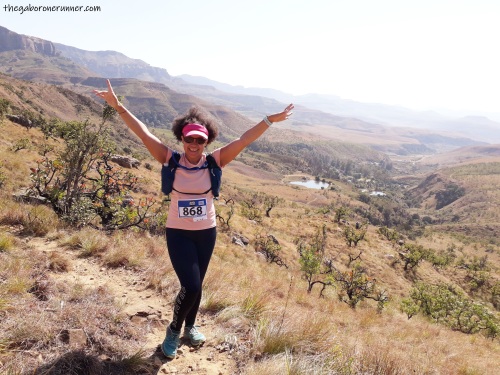 A Test of Character: It’s easy to sign up for races we know we will do well in, it’s not as easy to sign up for a challenge where you know you are out of your comfort zone, and possibly out of depth. But Run The Berg is a race that tests your character without breaking you. It brings out the best in you and Luzibo spoke of using her “never give up attitude” and the incredible “feeling of completion at the end”, even threatening to return for the Extreme! Elisa said “there are a lot of things out of my control in my life but running races and finishing them, that I can control. I remind myself of this every time I hit a wall in any race and it quickly spurs me on”. Ditiro spoke of the fact that he had to use a “huge amount of patience and toughness to get to the end”. Tapiwa showed how resilient she was by digging really deep to finish. For me, it was a reminder that I am strong, I am determined, and I always finish what I start.

The Camaraderie: The race website mentions that we get to “share the trails with some of the country’s top trail runners” and when I looked at some of the finish times, I was in awe. But I also want to mention all the other runners – there were so many people I interacted with on the trail. I also found Heloise who was one of the facilitators at the Gauteng Trail Clinic in July 2019. She was so strong on the down slopes, moving swiftly and effortlessly. I would catch up when we got to an incline but as soon as the downs came, I knew she would soon overtake. As a Botswana Team, we gave a hero’s welcome to each of our team members coming through the finish. 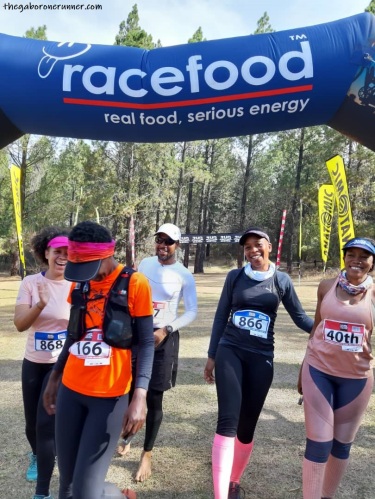 The Welcome Home: When 2019 Extreme Ladies Champion Nicolette Griffioen said on her race blog that there was “a passionate race organiser who congratulated each runner as they crossed the finish line”, she was in not exaggerating, nor was she talking about it from a more elite runner’s perspective. Warren King waited patiently for every single runner to come through and each one of us was welcomed with such genuine warmth, words of support and congratulations and a huge smile. That was special and for me the cherry on top.

It’s All In The Detail: I don’t critique the quality of races as much as I did when I first started running. But sometimes a race just stands out and it would me remiss for me to not to say anything. Run The Berg was beautifully planned and executed – right from race sign up to their preparation emails and information on logistics, etc. to the actual days of the event. Luzibo also mentioned “in all honesty, nothing beats running in nature in a well organised event’. Elisa was celebrating her 40th Birthday, and the race team made sure that her race bib stood out!

The medals were unique as they were individually hand crafted from stone, a poignant reminder of nature, earth and our more authentic selves.

Thank you to photographers, Arlo van Heerden/ Phonix Capture and Sinead Wannenburg/ Black Tulip Photography (photos from Runtheberg Facebook Page). To Coach Nicola, thank you, we did it again! To my Botswana Team, thank you for an epic ride. And to my mum, thank you for all your tales of mountain adventures.

I’m joining two amazing runners, Kim from Running on the Fly and Deborah from Confessions from a Mother Runner for their link up, the “Weekly Run Down”. Hop on over to their blogs and others, and be inspired to be better and do better this 2020!