I’m on a mission to complete 20 races this year as part of my #20in20 Race Challenge. With multiple races currently being cancelled or postponed because of the COVID-19 global crisis this goal may be harder to achieve than I had originally anticipated. Be that as it may, I’m going to stay as positive as I can and for now recap the races I’ve already done. On the 23rd February 2020, I participated in my 2nd race of the year and my 7th Half Marathon! We chose the Phobians Pretoria Half Marathon as it coincided well with my marathon training plan which had a 20K distance scheduled for that weekend. We travelled down to South Africa on Saturday and were particularly excited to be staying with our friends Modibedi and Karin who are based in Pretoria and have two similarly aged kids, also a boy and a girl. 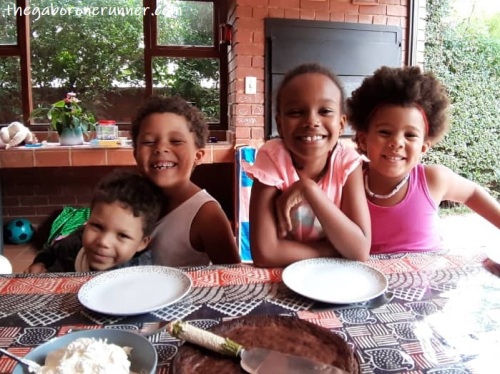 When we arrived in Pretoria around 3pm, we headed straight to the Phobians Club House to collect our race numbers. We entered a large room where there were several tables with cardboard boxes manned by very friendly and mostly elderly women. Our race packs were easy to find and the race team warned us that we needed to get to the race early to avoid parking too far away from the start. We took a walk around the sports grounds where several tents had already been pitched on the lawn. And just doing that filled us with so much excitement!

We heeded the race organisers’ warning and were up at 03h40. By 04h30 we were already in the car with our oats porridge, and left behind a peacefully sleeping household. As we approached the venue, we found several cars already struggling to get parking and hundreds of runners milling about. Luckily, we spotted a man frantically waving us to an unofficial looking space on the side of the road. After a small negotiation session over ‘parking fees’, we parked and hopped out. We were then surprised to learn that the start was not actually at the Club House but instead was behind a Petrol Station. We headed in that direction and immediately got into a very long queue for the portaloos. Unfortunately, the loos were positioned in an area with very little lighting and when it was my turn I said I silent prayer before entering the loo and used my phone torch to assess the situation. Thankfully, the loo was quite clean, albeit without toilet paper. I rummaged in my waist bag and found some tissue paper. Once I was done I found Ditiro waiting for me and we made our way into the crowd and found a spot as close as we could to the Start. There were 6,115 runners across all three categories, 10km, 21.1km and 42.2km. With a total of 2,483 runners, the Half Marathoners made up the largest group.

The marathoners set off first which gave us plenty of time to stretch as we waited for our start. I was quite relaxed as this was a training run and I had no time goals. I was just looking forward to some good hill training (being as this was Pretoria) as well as different scenery. The only thing that worried me slightly was that I had a sore throat that had been bothering me for a few days. But I was on a short course of antibiotics and my 8K shakeout run the day before had gone well. Ditiro was feeling slightly more competitive and looking forward to a solid time on a hilly Half.

We set off on time and Ditiro pushed his way forward. I had a slow start to the gantry and set my watch as I crossed the line. I’ve visited Pretoria a few times but mostly for shopping so this was the first time I would get to explore the city. The route didn’t disappoint.

The first half of the race was a steady climb up the Waterkloof Ridge. I had a comfortable start with my paces (min/km) mostly in sync with the crowd around me, 07:23/ 07:29. Unbeknownst to me, Ditiro was struggling to weave his way through the crowds and it took him a good 2 -3 km to find his stride. I told him later that sometimes it helps to be a slower runner! For the next few kilometres, it was a steady and relentless climb up as we made our way into the Klapperkop Nature Reserve and up to the hill top, my splits were – 07:15/ 08:14/ 08:03/07:48/ 07:04/ 07:26. As we made our way round the hill we were afforded spectacular panoramic views of the city as well as the surrounding landscape. I’m sure Pretoria residents would have loved identifying the different buildings. The only one I immediately recognised was the University of South Africa (UNISA) Building which is quite distinctive and is sprawled over such a large area.

I later learnt that this reserve is home to zebra, blue wildebeest, mongoose, hedgehogs, hares and porcupines and also boasts an abundance of very rich birdlife. I didn’t encounter any of this but I did get stung by something. I didn’t see it but a spot on my right arm was suddenly itchy and red. Luckily, this discomfort was only momentary. We ran past a narrow road with a sign pointing towards Fort Klapperkop. Apparently built in 1898, this  is one of four forts around Pretoria. It was once surrounded by a waterless moat and drawbridge and is now a museum.

When we got to the top, we were greeted by a traditional Scottish pipe band. A group of ten or so men were elegantly dressed in kilts and beautifully playing the bagpipes. That was the last thing I expected and we all applauded as we ran past. 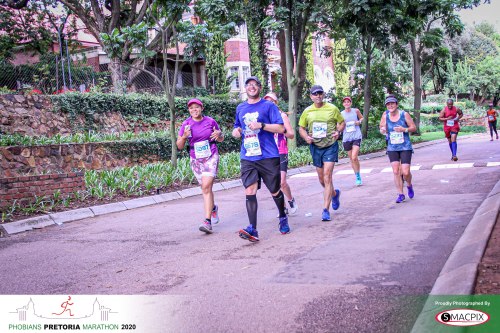 Around this point there was a slight incline and my pace dropped to 07:46 but as we made our way through the school and out into a residential area, it was relatively smooth sailing with my paces back to 07:11/ 07:26/ 07:21. My fastest km was the last one, a 06:27 pace as we headed towards and into the Phobians Clubhouse. As I entered the grounds, I turned up the heat even more and had a solid sprint on the grassy field to the Finish. 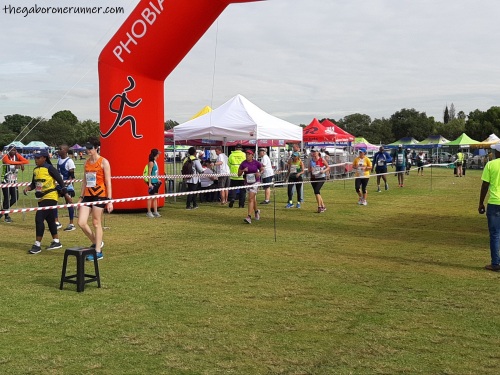 I ran the course in 2:34:31 (07:15 pace) and was really happy with the overall experience. I kept things steady and was never tempted to go off my plan and race it. This really allowed me to appreciate the beautiful scenery as well as buildings and structures around me.

Ditiro also ran a solid race but lamented that it had been a lot tougher than he had expected it to be. But even with his shaky start and the tough hills, he managed a Top 7% Finish.

After the race, we enjoyed some good cappuccino as well as my favourite potato chip stick that I’ve only found at South African races.

We then headed back to Karin’s where we found the kids in such good spirits and Karin busy making a wonderful brunch which included Tacos and Tortillas with all the scrumptious fillings. Being typically Swedish, she had also baked some gluten free cakes with raspberries and lots of cream. It was a great end to such a good race. Once we had stretched and relaxed and caught up on all our news, we hit the road for our 5 hour drive back home.

I’ve now run in so many parts of Gaborone that I was really happy to be running in a new place! I loved the route as it was designed in such a way that gave us the opportunity to see so many attractive and historic buildings in Pretoria. The climb up Klapperkop was tough but the panoramic views at the top made it worth our while. The traditional music bands, both at the top of Klapperkop and at the entry to the High School, were a real treat and a unique touch.

I’m joining Kooky Runner and Zenaida on their link up, Tuesday Topics. I’m also joining a new link-up, Runner’s Roundup with Mile By Mile, Coach Debbie Runs, Confessions of a Mother Runner, Runs with Pugs, Running on Happy, and Faux Runner! Hop on over to their blogs and others, and be inspired!