On the 4th of November 2018, I ran the Soweto Half Marathon in Johannesburg, South Africa. Having done the 10 km Race in 2017, this was actually my second Soweto race experience. However, given how tough10 km was, I knew that doing the Half would be a whole new and challenging experience in itself. I spent three months training for the race and was coached by Nicola from Running Happy. Coach Nicola designed a training plan that was focused, enjoyable and completely tailored to my needs and that of the course. Soweto is a tough race which lulls you into a false sense of security in the first half, only to beat you down with some gruelling hills in the second half.

The searing summer heat doesn’t help matters and after half an hour of running you find yourself battling the sun as much as the tar. But the vibe and energy of the “The People’s Race” is probably its biggest drawing card and of all the races I have done, nothing quite beats the Spirit of Soweto. The race slogans last year, “Run Your Great” and “The Time is Now” only helped to motivate me in my training as I sought to conquer Soweto. 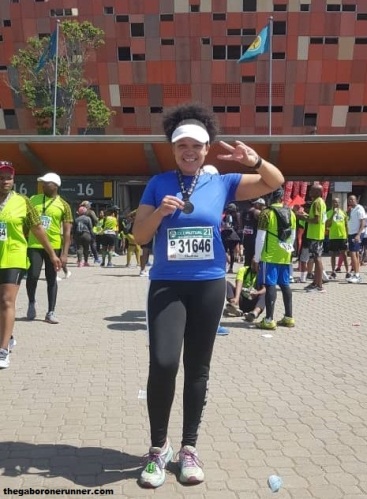 This is what I LOVED about the race

The Vibrant Start: This was the 25th edition of the race and there were around 30, 000 runners across three distances – 10 km, Half and the Marathon. According to the race presenter, 300 people were from Botswana which was the highest represented country after South Africa. Our “team” was made up of Elisa, Tapiwa, Thuna, Taffy, Ticha, Ditiro and myself and our excitement as we arrived in the parking area was palpable. 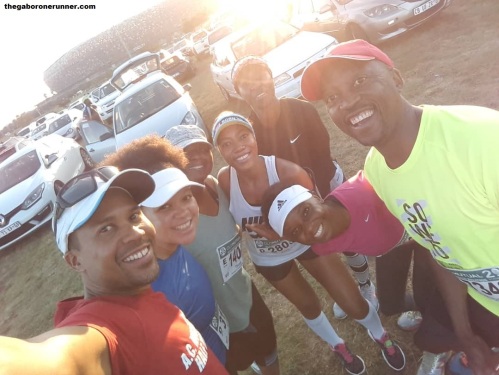 After a trip to the bathroom, we took some selfies at the top of the stadium and down below we could see last minute preparations as well as that Finish Line. This made the butterflies in my tummy flutter a little bit harder!

We took a couple of more photos as we made our way to our corrals and you’ll notice some of us looked very patriotic in our Botswana Flag colours – blue, black and white 🙂 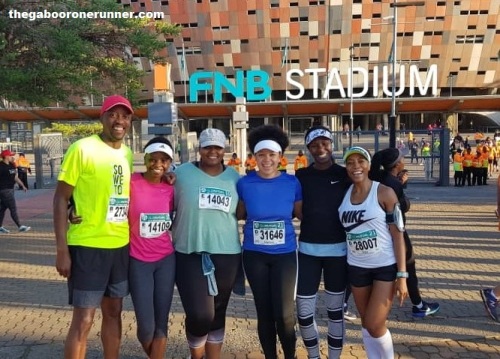 What I really loved about the start was the variety of people – professionals and amateurs, all shapes and sizes, all colours and all ages. At one point, we walked behind two ladies who had their age “70” stitched as a badge of honour on their running shirts.

There was some friendly banter between runners, friends and strangers alike, and several mentions of the dreaded hills and talks of strategy. Ditiro, Elisa, Tapiwa, Ticha and I were all doing the Half Marathon. We compared resting heart rates, and laughed at those hearts that seemed to be beating faster than others. When the gun sounded, we were far from the actual start line, so the first few minutes of the race was a very slow shuffle to the start. The pumping music felt like a drum roll marking our entry onto the grand stage that is Soweto. As we made our way forward, our new running recruits, Taffy and Thuna, were somewhere in the crowds behind us, ready to take on their first 10 km race! 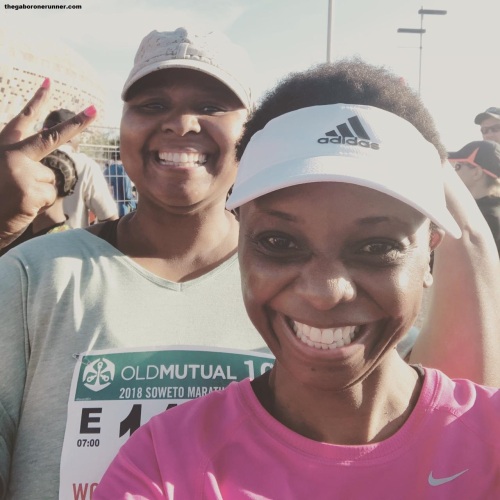 The Lively Route: The race starts and ends at the majestic FNB Stadium, also known as Soccer City or The Calabash for it’s beautiful and unique design. As you leave the Start Line, at first all you see are crowds and crowds of runners.

Then after 2 – 3 km, you eventually emerge onto a straight wide road with lots of music, pantsula dancers and photographers. Eventually this narrows into the hustle and bustle of Soweto. I don’t remember the street names but I remember some of what I saw and the energy I felt. At some point, I remember crossing a bridge over a river and as I looked down on the banks there appeared to be a small pig sty, a cattle kraal and a goat kraal. I then remember lots of winding through a residential area and having to cross some flowing water on the road. We then emerged into an area where there were lots of spaza shops (small convenience stores usually run from home). This is where the cheering was particularly loud and energetic – some residents stood on the side of the roads or on the street corners, while others cheered  from their houses. As we emerged from the windy neighbourhood, we ran down a road leading towards a big tower.

After this, the route went through a slightly industrial-looking area with a train station on the left and a big field with massive trees on the right. Shortly after this, around the 11/12 km point the route started to go up and up and up, with the biggest monster of a hill being around the 18 – 19 km point on the Soweto Highway. There was also a heavy police presence guiding runners in the right direction. Eventually we saw the Stadium and you could almost hear the sigh of relief from runners!

The Vibe: Whenever people talk about Soweto, they mention the “vibe”, the “atmosphere”, the “buzz” – and I guess we are all trying to choose a word that best describes the energy out there. This year South Africa’s President, Cyril Ramaphosa was there and Taffy caught him on camera wearing Race Bib “1”. This certainly added to the excitement of the day. 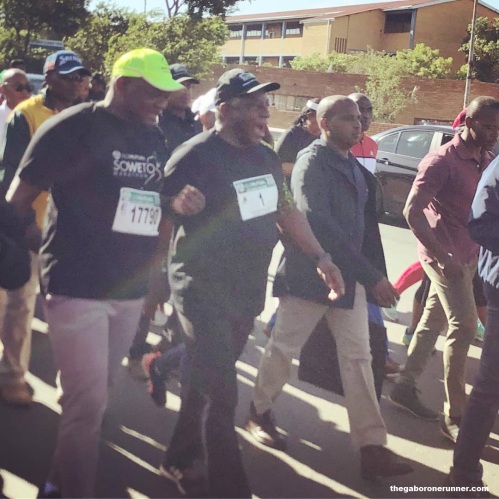 But the real buzz came from the many streets lined with people, old and young supporters, most of them residents of Soweto. I remember a young boy, he can’t have been more than 7, holding up a brown cardboard sign that read “Only 6 km to go” and he had no idea what that meant to me! And of course, there is the energy from the running crowd itself. You are never without people and a sense of solidarity builds up with the strangers you are surrounded by. It is this energy that brings people back year after year.

My Strong Performance: Those who followed my training plan for Soweto may remember that I got a glute/hamstring injury a week from Race Day. I spent Race Week grounded and at daily physio sessions. I always knew Soweto would not be a PB race but I had really hoped to run a strong race and feared that this injury would prevent that. I spent a lot of time warming up for the race in the morning and the slow start because of the crowds helped ease me into the race (pace: 08:31 min/km). Elisa, Ticha and Ditiro quickly weaved their way through the crowds and I lost sight of them almost immediately but Tapiwa and I were together for at least 5 km.  Our pace was very fast (07:12/ 06:49/ 06:44/ 06:50) but I was extremely surprised at how comfortable I was. My legs felt very strong and happy. When Tapiwa picked up the pace, I was on my own but continued with my solid paces from 6 – 11 km (07:03/ 06:48/ 07:28/ 07:05/ 07:01/ 07:23). My splits were actually FASTER at this point than for the Diacore Half Marathon! At the tower (10 km) I spotted Tapiwa so I was very pleased that I hadn’t fallen too far behind.

My splits in the second Half tell a completely different story, between 12 – 17 km they were: 07:56/ 08:33/ 09:03/ 08:40/ 08:20/ 08:05. I kept pushing and on these inclines I never walked once. In hindsight, I wish I had adopted a walk-run approach as I suspect I would have been stronger for it. Also, in hindsight this is where I should have taken a gel but having not used one in training I was reluctant to do so now. By this stage, my glute/hamstring was crying and I was also feeling a similar pain in my left leg. My physio had told me to spray my legs with cold water whenever I could and this really seemed to help. Then came the dreaded 18 – 19 km climb where I was forced to walk, my splits: 10:34/ 09:05. At this stage I just wanted to be done. But upon seeing the Stadium I dug deep and managed to pull out a 07:49 and 08:12 for those last 2 km! My total time was 2:47:12 and according to the race stats I was in the Top 45% of women finishers!

The Stadium Finish: I will have to steal a line from my last Soweto Race Recap – “The final kilometre was a gentle descent into the stadium, through a tunnel and then into a cacophony of noise that made us feel like football players about to kick off for a cup final!” I am yet to find a finish line that matches Soweto. As you enter that tunnel you really do feel quite heroic and when you emerge into the light and see that Finish Line after that assault of the second half, there really is no better feeling. I finished with a sprint pace of 05:37 probably my fastest ever finish. Unlike 2017 where crowds were allowed on the grass, this time supporters were confined to the stands. So I didn’t see anyone until I was making my way out of the Stadium and then I spotted my cheering squad. 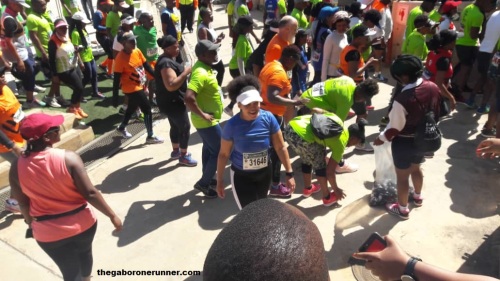 By this time all had finished their races and Polelo and Paul, who had also travelled to Soweto to support us, were in the stands too! Polelo reached out and gave me a huge hug. 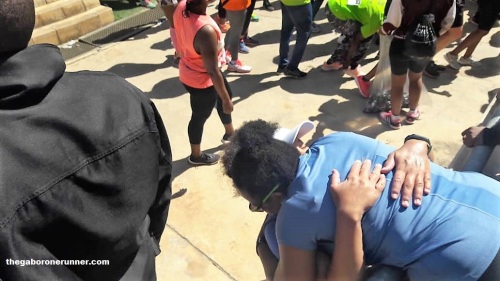 I then saw and hugged Taffy and Thuna who had just made me so proud – their first 10 km Race and at Soweto!

The Celebrations: A race like this deserves only the best kind of celebration! Once we got home, some took a quick nap and those of us still awake were taken through a 20 minute yoga routine by Elisa which really helped. After a shower, we headed out for a scrumptious lunch at Gemelli’s, an Italian Restaurant which was chosen by our Joburg foodies, Ticha and Taffy! There was so much to choose from on the menu but when I spotted gluten free pasta (which is not readily available in Botswana restaurants) I knew exactly what I would have – good ol’ pasta followed by a hearty gluten free brownie. 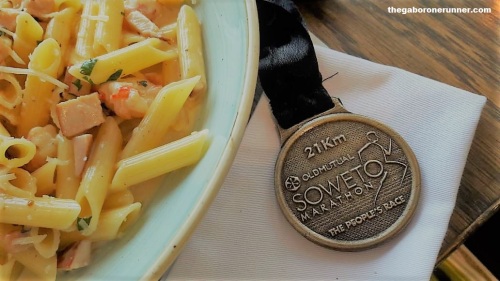 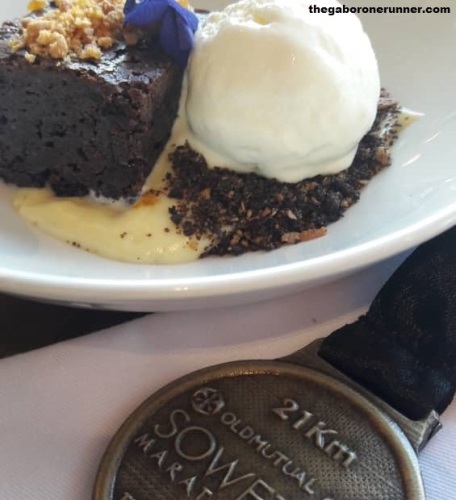 It was so great to be with everyone. We all had our individual war stories but we all sat that much taller knowing we had conquered the Hills of Soweto.

Thank you to my amazing group of friends – this was an incredible journey, one that needs to be repeated in 2019. Thank you for capturing so many photos and to Elisa and Taffy – thank you for re-sending the photos when my phone died! Thank you to all the blog readers and runners out there who all inspire me to work harder and strive for better. Thank you to my family for all the babysitting. Thank you to my kids who think I win every race! And yes kids, I WON Soweto. 🙂 Thank you to Coach Nicola for taking me to my SECOND Half Marathon. And a final thank you to my physiotherapist Ana who pulled out all the stops to get me to this race with just days to go!

I am joining the lovely and inspirational Kooky Runner and Zenaida who are hosting a new link up called “Tuesday Topics”. I’m also linking up with Lora from Crazy Running Girl, Marc from Train With Marc and Debbie from Coach Debbie Runs for Coaches’ Corner! Hop on over to their blogs and others, and be inspired!